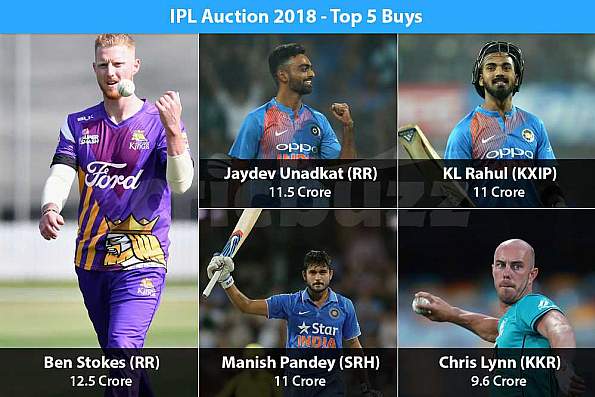 Earlier this month, the 8 Indian Premier League franchises were asked to submit their player retention lists with each team being able to retain a max of 5 players (including the use of RTM cards at the auction). Click here to see all 18 players that were retained by the different teams.

The biggest highlight of the IPL 2018 Auction was the massive bidding made for English all-rounder Ben Stokes, as he grabbed a massive contract of Rs.12.5 crore, making him the most expensive player from the auction two years in a row. He went to Rajasthan Royals and it would’ve been quite a big gamble for them, given that Stokes is currently going through legal issues for a pub brawl in Bristol last year.

Quite a few Indians earned big bucks during the 2-day auction, including Jaydev Unadkat, KL Rahul and Manish Pandey, all of who bagged contracts upwards of Rs.10 crore. From the overseas players, the most exciting buy was that of the 19-year old leg spinner from Afghanistan, who went for a whopping amount of Rs.9 crore to Sunrisers Hyderabad, using their RTM card to snap him up from Preity Zinta of King’s XI Punjab, who won the original bidding war for Rashid. 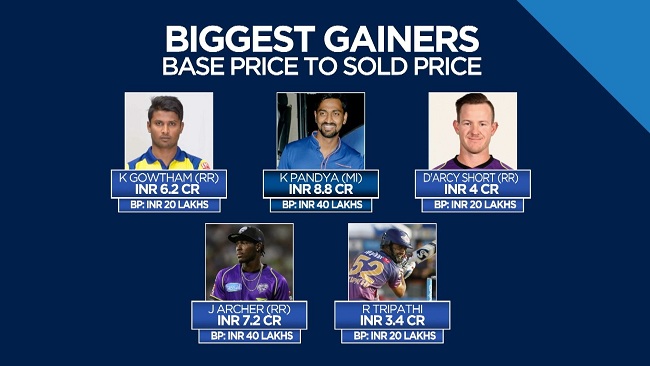 Of course, the biggest surprise of the auction was teams overlooking Chris Gayle a couple of times. Yes, the man who holds the record for the highest individual score in the IPL (175) and most number of sixes in the IPL (265), went UNSOLD a few times before Kings XI Punjab picked him up for his base price of Rs.2 crore, just minutes before the auction ended.

Other big names that went unsold include England captain Joe Root, New Zealand batsman Martin Guptill, the deadly fast bowler from England Tymal Mills and Sri Lanka’s Lasith Malinga. Mills was the second highest paid player in IPL 2017 but failed to pick a single bid this year while Malinga had become a household name for Mumbai Indians fans over the years.

A couple of interesting stories came up with the 2018 auction as well. One was of 17-year old Sandeep Lamichhane who created history by becoming the first player from Nepal to be a part of the IPL. Another interesting story was that of Aryaman Birla being picked up for Rs.30 lakh by the Rajasthan Royals. While IPL has mostly boasted about ‘rags to riches‘ stories, Aryaman is the son of famous industrialist Kumar Mangalam Birla, Chairman of the Birla Group, and a man with a net worth of over $12.5 billion. Wow!

You can find all major updates on the 2018 Indian Premier League on GutshotMagazine.com!