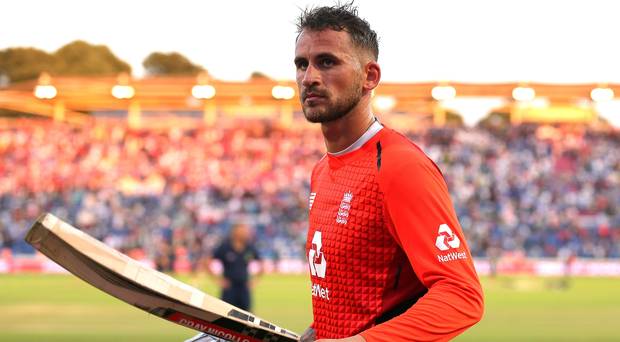 Alex Hales’ unbeaten 58 took England to a dramatic final-over win in the second Twenty20 international against India. Chasing 149, England slipped to 44-3, but Hales led a recovery that left them needing 12 from the final over. He hit Bhuvneshwar Kumar for six, then four, with David Willey scoring the winning runs to level the series and set up a decider in Bristol on Sunday.

England’s bowlers earlier adapted well to the dimensions of the Cardiff ground to restrict the tourists to 148-5. After dominating a weak Australia side, England were chastened by an eight-wicket defeat at the hands of impressive India at Old Trafford on Tuesday.

In Cardiff, England recognised that the short straight boundaries could be difficult for spinners to bowl with and omitted Moeen Ali in favour of debuting pace bowler Jake Ball. Ball formed part of an excellent display by England’s four fast bowlers, but India took 22 off his final over, then carried that momentum into the field.

Hales, in an unfamiliar position of number four, batted with intelligence and composure to lead England’s navigation of India’s spinners – Kuldeep Yadav and Yuzvendra Chahal returned a combined 1-62. Still, the visitors’ death bowling was brilliant, ramping up the tension in front of raucous India fans in sun-kissed Cardiff.

Hales, though, hit Bhuvneshwar’s first ball of the final over for a huge straight maximum, completing his half-century and effectively sealing victory.

England’s plan to bowl back-of-a-length, varying their pace, forced India to hit towards the long square boundaries and choked the tourists.

Rohit Sharma skied Ball, Dhawan was run out because he dropped his bat and KL Rahul was bowled looking to loft Liam Plunkett, leaving India 22-3. India found the boundary only four times in the opening 10 overs, but England missed the opportunity to remove Kohli on 21 when a diving Jason Roy dropped a very difficult chance at long-on off Adil Rashid. The captain went on to make 47.

At the beginning of the 19th over, India had reached only 126-5, Plunkett excellent for 1-17, Willey similarly so to return 1-18. However, by this point England had become predictable. MS Dhoni, playing his 500th international match, read Ball’s plan and swatted 17, while India were boosted by a no-ball that raced to the fine leg boundary for five. It took them to a total that was almost enough.

England captain Eoin Morgan said in the post match interview, “To get over the line has boosted our confidence. The momentum does ebb and flow throughout the game and the series. Alex played magnificently today. Small partnerships here and there are very powerful when you’re chasing.”

India captain Virat Kohli said, “Credit to England with the way they started with the ball. When you lose momentum it’s very difficult to get it back. We would have liked 10-15 more runs. England played Kuldeep really well today – they’d done their homework. We had a good game but England were better than us.”

It’s two very strong teams, both at the top of their game, so Sunday’s third and final deciding T20 match at Bristol should be a cracker! We will bring you an update on the outcome of that match right here on GutshotMagazine.com