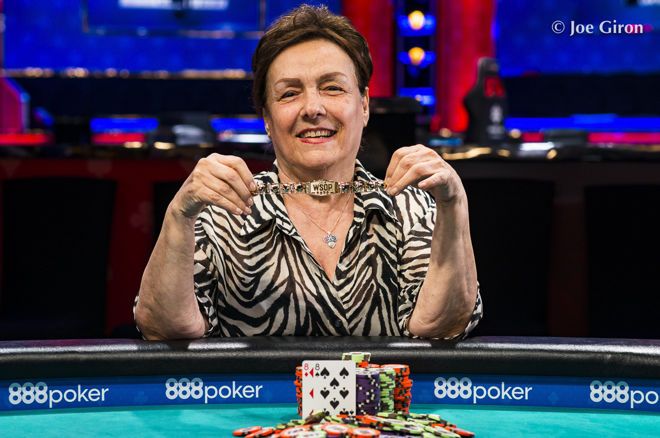 Four days back, Event #36: $1,000 Super Seniors NLHE kicked off at the Rio All Suite Hotel and Casino on the Las Vegas strip. A record breaking field of 2,191 entries were recorded in this event, much higher as compared to last year, with the minimum age limit being dropped from 65 to 60 years.

After three days of play, just two players were left in the highly inexperienced Robert Beach and female poker player Farhintaj Bonyadi. These two bagged up their chips to return for an unofficial Day 4 of the tournament, as reported yesterday. Both didn’t have much of a poker CV until a few hours back, with Bonyadi having around $90k and Beach having barely $5k in live poker cashes.

Bonyadi came out with over a 4:1 chip deficit today and the chances of her winning were not too bright. They played 61 hands at the end of Day 3 before bagging up and Bonyadi looked like a different player the next morning. She played aggressively and was rightfully awarded her first ever WSOP gold bracelet, to go with a massive prize of $311,451 for first place.

In what became the final hand, the board opened 6-4-7-3-5, hitting a straight and both players were all in by the river, with Beach holding 9-7 and Bonyadi’s pocket eights completing a higher straight than the board. She took down the pot and the title, with her son Farzad Bonyadi on the rail.

They now become the first mother-son duo to win gold bracelets at the World Series, with Farzad having won 3 bracelets in the past. While he was there to guide her, he did mention that, “She did it all on her own. I told her to play patiently when she was short, and she did it. I think she played masterfully today.”

Keep reading GutshotMagazine.com for more daily updates on what’s happening at the 2018 World Series of Poker.