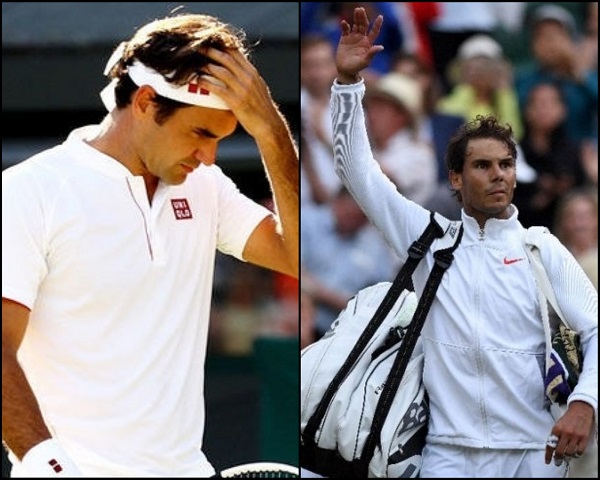 Nadal ecstatic as Federer crashes out of Wimbledon

Rafael Nadal and Roger Federer are two of the undoubted best in the Open Era of tennis. They’ve enjoyed a riveting rivalry for more than a decade and have often exchanged the world number one and two spots. While most thought their careers were on a down-slide, they have rolled back the years in the last 12-18 months and proved to everyone why they are legends of the game.

Over the years, there was one thing that was always understood – no one can beat Federer on grass (Wimbledon) and no one can beat Nadal on clay (French Open). Federer being the defending champion at Wimbledon and Nadal having won the last two editions of Roland Garros is a proof of that.

However, it’s going to be different this time around as Nadal has progressed to the semi-final, while Federer has made a shock exit in his quarter-final game. Both were 5-set thrillers and Federer crashed out after equalling his own record of winning 34 consecutive sets at the Wimbledon Championships.

“I felt great in practice, good in the warm-up. I’m feeling the ball well. It just happened to be that today wasn’t the day,” said the 36-year old after losing to South Africa’s Kevin Anderson. He won the first two sets and had match points before the #8 seed Anderson made a remarkable comeback. The final set was a never-ending one, with Anderson finally winning 13-11.

On the other, Rafael Nadal weathered the Juan Martin del Potro storm. It was another thrilling game that lasted almost five hours and saw Nadal recover from being 2-1 down in the match to break del Potro in the final set and eventually win. What a fantastic day it was for tennis enthusiasts!

Nadal is now favourite to win the tournament, but he should be careful of Anderson, who knocked out the original favourite. Keep reading GutshotMagazine.com for daily updates on the 2018 Wimbledon.