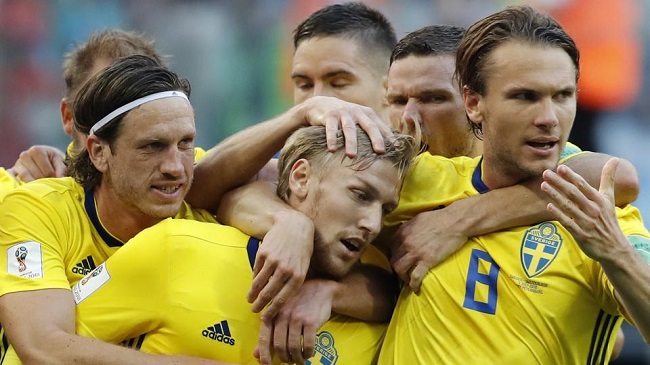 Yesterday was the last day of the FIFA 2018 World Cup Round of 16 matches, with 6 of the 8 quarter finalists already decided. The final two were to be decided among Sweden and Switzerland, and England and Colombia. Sweden did well to get to this stage itself, considering they were playing without their star player Zlatan Ibrahimovic.

In the first game of the day, Sweden played Switzerland and they began as slight underdogs, but they would’ve been happy knowing that Switzerland have never won a World Cup knockout game before, losing all of their last 7 knockout games. The match began, and Switzerland was fairly dominant for most part.

At the end of 90 minutes, if you looked at the stats of the match, you will assume that Switzerland progressed to the quarter-finals. 18 attempts, 4 shots on target, 556 passes with an 86% pass accuracy and a huge majority of the possession as well – 68%. However, one of the three Sweden shots on goal was enough to give them a lead that Switzerland couldn’t recover from.

In the 66th minute of the game, Emil Forsberg broke the deadlock with a shot on target from outside the box. A decent shot it was, and it would’ve been saved by the goalkeeper if it hadn’t taken a massive deflection off the Swiss defender’s foot. Sweden took a 1-0 lead!

The efforts to get level in the second half were valiant, but Switzerland only made matters worse for themselves with Michael Lang getting red carded in the 94th minute. A free kick was awarded from just outside the box and Sweden had a chance to go 2-0 up, but it was a good save by the Swiss goalkeeper. Eventually the whistle was blown, and Sweden went through to what became their first World Cup quarter final since 1994. Full match highlights here.

A couple of days of rest have been assigned now before the final 8 countries begin what will be an exciting round of quarter finals. Keep reading GutshotMagazine.com for all major updates on the 2018 FIFA World Cup.