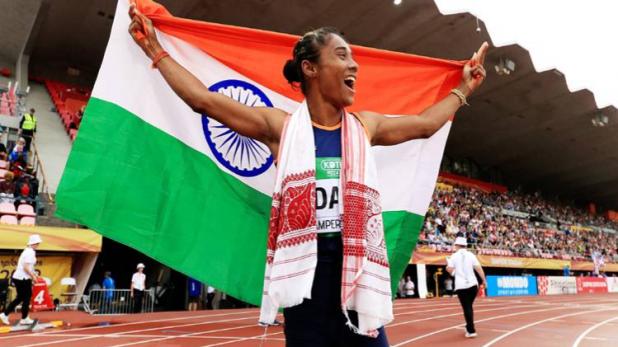 Indian sprinter Hima Das yesterday created history in Tampere, Finland, by becoming the first Indian ever to win an athletics gold medal in any international sporting competition. She finished first in the 400m Final in the 2018 World U20 Championships in Tampere, Finland.

Just 18 years of age, Das was very slow off the blocks, but she accelerated in the final 80-100 meters, completing a marvellous victory by overtaking three opponents and winning quite comfortably in the end. She clocked a time of 51.46 seconds, beating Romania’s Andrea Miklos who finished second in 52.07 seconds and USA’s Taylor Manson who finished third in 52.28 seconds.

Das is the daughter of a rice farmer from Nagaon district in Assam, who began by playing football in rice fields. However, she was spotted and asked to take up track and field, less than two years ago. Now, she has brought India its first athletics gold medal across all global events.

“Her race begins in the final 80 metres. Her progress just shows how much potential she has. It has been just two years since she first wore spikes,” said coach Nipon Das about Hima who has a personal 400m best of 51.13 seconds. She had also finished 6th in the Commonwealth Games 400m Final in Gold Coast in April, clocking 51.32 seconds.

She was extremely pumped up after having won the race, proudly lifting up the Indian flag. Watch the video here: