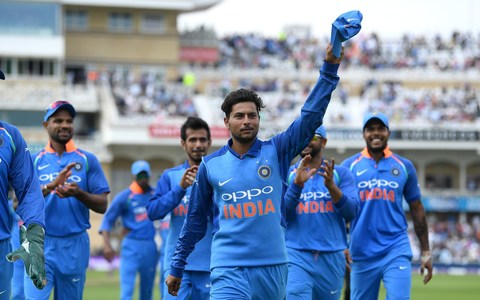 Just recently, India beat England 2-1 in the T20 series and yesterday, it was a brilliant all-round performance that gave them a win in the opening game of the ODI series. This was supposed to be India’s biggest test, playing England which is one of the best ODI teams in the world at the moment. However, it was a piece of cake for India last night.

India were playing without their main pacers Bhuvneshwar Kumar and Jasprit Bumrah and the English batsmen were punishing all loose balls early in the powerplay overs of the 1st ODI. They scored an opening partnership of 73 in 10 overs, until Kuldeep Yadav was introduced into the attack.

He has had a brilliant time in UK so far and he only made it better yesterday. He recorded his best T20I figures against Ireland and then bettered it against England. Now, he has also recorded his best ODI figures. He bowled a magical spell of 10-0-25-6 that turned out to be the 4th best figures for an Indian bowler in ODIs, only behind 6-fers by Stuart Binny, Anil Kumble and Ashish Nehra.

England’s good start was reduced to an average 1st innings score of 268, with Jos Buttler continuing his good form. He scored 53 while Ben Stokes scored a painstaking 50 as well. The chase then turned out to be a walk in the park for India, as both openers went after the English bowlers.

Shikhar Dhawan had a brilliant Champions Trophy in England last year and he played another good knock of 40(27) before being caught at short third man. Then, the Indian captain Virat Kohli walked to score his 47th ODI fifty while playing second fiddle to Rohit Sharma who was on a rampage.

Kohli was stumped for 75 just before India could complete the chase, while Rohit went on to get his 18th ODI century for India and ended on 137(114)* as India recorded an emphatic 8-wicket win to kick start the ODI series. Kuldeep was awarded the Man of the Match for his record performance and India lead the series 1-0.