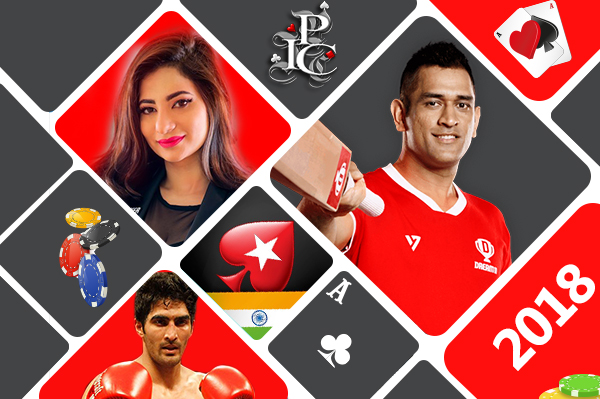 2018 was a year filled with many landmark moments in India’s gaming and poker history. The industry had its ups and downs as it is with life in general, but things started to move towards a more liberal and open environment for the industry. Globally speaking, many countries also took steps to regulate the gaming industry and it has proved to be a boon to the people associated with it.

Let’s look at some of the major headlines of 2018:

On 20th January 2018, a Saturday, 112 Indian women were honoured by the President of India Ram Nath Kovind at the Rashtrapati Bhavan, New Delhi, for being the first women to achieve something in their respective fields. Among them was the well-known poker pro Muskan Sethi. The felicitation ceremony was an effort of Maneka Gandhi, the Union Women and Child Development Minister.

The next major gaming headline of 2018 was when the multiple medal winning boxer Vijender Singh signed on as the brand ambassador of PokerBaazi, one of the companies helming the Indian online poker scenario. Sportspersons with a calibre like that of Singh coming into the poker scene obviously gives a major boost to the industry in general and helps break the taboo surrounding the skill-based game. During the year, quite a few more celebrities joined the industry,

Following Singh’s entry into the gaming world, former Indian World Cup winning captain and wicket-keeper batsman MS Dhoni also signed with Dream11, the leading fantasy sports website in India, to be its brand ambassador. 2018 was a great year for the company with plenty of major partnerships, and signing MS Dhoni was one of the biggest of them, considering that he is one of the greatest sportspersons this country has ever seen.

March saw a reputed online poker website called ‘Khelplay Poker’ shutdown its poker operations, while the rummy operations continued. Sachar Gaming, the parent company of Khelplay later began operating PokerStars India as you will see below, and that could be a major reason for the shut of Khelplay Poker.

Global poker giant PokerStars got into a partnership with the leading Indian gaming company Sugal & Damani Group to launch their PokerStars India website on 17th April 2018. Their first major tournament on the site was the INR 10 Lakhs Freeroll tournament. They later went on to launch the Diwali Rush series to celebrate the joyous festival of lights with over INR 1.5 Crores in guaranteed prizes and a PSPC Platinum Pass.

PokerStars India wanted to make a grand entry after their launch in April and they thought why not induct Muskan Sethi as their Team Pro? Already featuring the veteran player Aditya Agarwal, they strengthened their team by adding Muskan to it, who was felicitated by the President earlier in the year. Sethi became the first female Indian poker player to have been made a Team Pro on PokerStars.

Global Player League, earlier known as Global Poker League, was a free-to-play poker competition which started in August 2017. They partnered with Kwan Entertainment, India’s largest talent management company, and announced their entry into the Indian market. Later in April 2018, GPL India partnered with PokerStars India to be their exclusive skill-game partner in India. The GPL had 6 teams competing for a long season, which ended in November, with Mumbai Jetsetters emerging victorious.

India Poker Championship (IPC), started in March 2010 by two poker aficionados Sameer Rattonsey and Peter Abraham, was a milestone moment in India’s poker history. The duo was later joined by another two poker fanatics Amin Rozani and Rajeev Kanjani in 2012 and the four were involved in multiple successful ventures ever since. The IPC Team took a hiatus from the Goan poker scene in March 2016, but in May 2018, they came back to Goa and took charge of the poker room in Big Daddy Casino situated in the Mandovi river. To commemorate this achievement, they also launched the Big Daddy tournament on Spartan which awards a Goa trip package to the winner to play at the Big Daddy room.

The second season of Poker Sports League (PSL) commenced at the Deltin Royale in Goa in May this year. Goan Nuts, captained by the seasoned pro Dhaval Mudgal, lifted the trophy and the team took home INR 2 Crores as 1st place cash prize. They beat Gujarat Falcons in the finals, who had to settle for INR 1.2 Crores as runner-up cash.

This list runs up till halfway through 2018. The second half of the year also saw some staggering achievements in poker, among them being Nikita Luther’s historic moment of winning a WSOP bracelet and becoming the only Indian female to do so. Keep reading GutshotMagazine.com for Part 2 of this article as well as for your daily dose of general poker news from around the world.