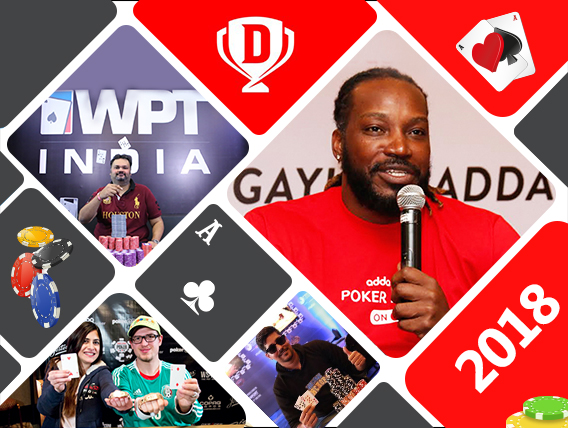 2018 was a year with plenty of developments in the gaming sector, both in India and in other parts of the world. A couple of days back, we listed down the top 10 stories that made headlines. Part 1 of this list laid down some of the major moments in India’s gaming industry up till mid-2018. Here, we’ve listed down events of the next half of the year, which includes some important developments in the Indian scenario.

Starting off the second half of 2018 is a story of immense importance. Female poker pro Nikita Luther registered for the Tag Team NLHE event at 2018 World Series of Poker (WSOP) in June this year. She was accompanied by Germany’s Giuseppe Pantaleo and they shipped the event for $175,805. Every Indian was proud of the fact that she earned her country another WSOP bracelet, especially her being a female in this male-dominated scene. India’s first WSOP bracelet was brought home by Aditya Sushant in 2017.

After Luther’s staggering achievement at 2018 WSOP, another pro Nishant Sharma finished 34th at the 2018 WSOP Main Event, taking home $230,474 (~INR 1.58 Crores) as his cash prize. It turned out to be a record finish for an Indian in the history of the WSOP, with no other Indian having cashed out higher than Sharma till date in the WSOP Main Event. Another well-known name Vivek Rughani also made a deep run at the Main Event, finishing at 88th position.

The West Indian cricket legend and ace batsman Chris Gayle jumped on the Adda52 team as a brand ambassador in August. To commemorate this high-profile addition to its team, Adda52 launched the Gayle Storm tournament on its platform, having a massive guarantee of INR 50 Lakhs. Players like Gayle entering the online poker industry and gaming industry in general makes the sport even more important and helps break barriers stopping its growth. Another celebrity Sunny Leone also joined 11Wickets as their brand ambassador later in the month.

Dream11, the leading brand of fantasy sports in India, having previously signed on MS Dhoni as their brand ambassador, saw Tencent, a multinational Chinese conglomerate, investing $100 million in the company. Tencent Holdings Limited, founded in 1998, is a leader in providing internet services and mobile gaming services to the masses. Dream11 also went on to strike some historic deals in the fantasy sports industry this year. In late-2018, they partnered with giants like International Cricket Council (ICC), International Hockey Federation (FIH) and Big Bash League (BBL).

PokerDangal, one of the up and coming poker websites of the country celebrated its first birthday on 26th September and also simultaneously acquired XLN Media’s flagship online gaming business PokerMet. The latter was a poker website and had over 10,000 registered users and 2,000 depositing players on it. PokerDangal paid out all the outstanding dues of its players first. In a similar development, back in late 2017, another notable poker company called FTRpoker was acquired by the Indian poker giant The Spartan Poker. FTRpoker also subsequently revamped their website and in turn attracted a larger player-base eventually.

After Season 2 of the Match IPL’s title going to Haryana Hawks, the third edition saw Pune Kings being crowned as the new champions. The team took home the attractive trophy plus a massive cheque of INR 1.35 Crores. The team was led by Guarav Gala and featured many other known pros like Tanmay Bagga, Suchi Chamaria, Rubin Labroo, Akshay Shekhar and Akshay Nasa. Owner of the Match IPL, Raj Kundra, felicitated the winners and the tournament was followed up with a glamourous party. The runner-up title went to Mumbai All Stars led by famous Bollywood personality, Harman Baweja.

PokerBaazi, one of the giants of the poker scene in India, announced in November that they’ll be hosting the biggest ever tournament in the history of online poker in Inida, which will have a guarantee of INR 2 Crores. They named it the ‘Game Changer’. Absolutely no details were revealed apart from the fact that it would have an INR 11,000 buy-in and INR 50 Lakh GTD first-place prize. Varun Ganjoo, Marketing Director at PokerBaazi, said, “This is certainly going to be India’s biggest poker tournament. To top that, the winner gets a toasty 50 Lakhs. If that isn’t life-changing, I don’t know what is!” This will turn out to be one of the most anticipated events of 2019.

November saw 2018 World Poker Tour (WPT) India being hosted at the Deltin Royale in the poker capital of the country, Goa. The Main Event of the series witnessed a staggering field of 697 entries, making it the biggest WPT India Main Event. Nikunj Jhunjhunwala overcame this massive field to ship the event and the life-changing amount of INR 66.35 Lakhs as 1st place cash prize. Another well-known player Sahil Mahboobani finished runner-up in this for INR 46,53,000.

One of the leading brands of the Indian online poker industry, The Spartan Poker, hosted its second India Poker Championship (IPC) Awards at the luxurious Sahara Star Hotel in Mumbai on 1st December. The event saw a lot of well-known and accomplished poker players who won big on Spartan being felicitated for their achievements. Rannvijay Singh, Spartan’s brand ambassador, and Shibani Dandekar, the host of the evening, were also a part of the celebrations. Such occasions are brilliant for promoting the game of poker in the country, while also motivating more people to join the game.

The last major headline of the year was that of international poker pro Patrik Antonius coming to India at the invitation of Deltin Group. The group completed its 10th year of existence and to celebrate this achievement, they invited the Finnish high-stakes pro to make the event star-studded. The event also included other celebrites like the Brazilian actress/model Bruna Abdullah, Indian model Shazahn Padamsee, singers Shraddha Pandit, Neeti Mohan, Pinky Maidasani and Shilpi Paul.

That wraps our list of the top 20 Indian stories of 2018. We have also curated the top 20 international stories of 2018 in two parts, so you can check that out as well. Keep reading GutshotMagazine.com for more general poker news from around the world as well as upcoming tournament info and much more.