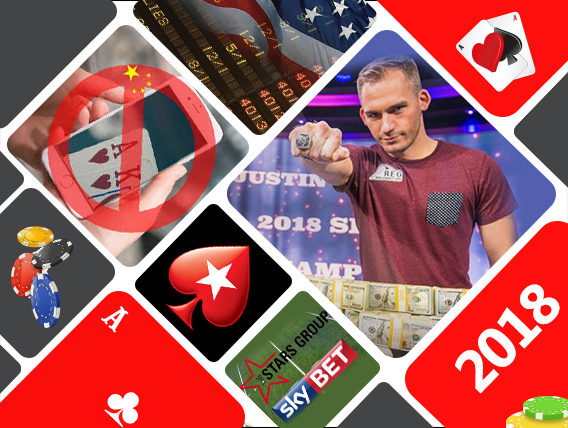 The international gaming scene in 2018 witnessed some staggering achievements from inidividual players as well as many firsts for the industry itself. Ups and downs are a part of life and similarly in the industry, there were a few negative developments as well, which we have all covered in this article as we move towards the end of 2018.

Let’s look at the top 10 international stories that were the talk of the town in the worldwide gaming industry in 2018:

Starting the year, many big names of poker parted ways with international giant PokerStars. The first in line was female pro Vanessa Selbst who quit being a PokerStars Team Pro. Next to go was American pro Jason Mercier. France’s Bertrand ‘ElkY’ Grospellier also went out of the Team. Mercier and Grospellier are among some of the world’s top players and have upwards of $13 million in live cash earnings. Isaac Haxton, Victor Ramdin, Felipe Ramos also followed suit later. Ironically, some of thise who parted ways with the gloabl leader joined partypoker soon later.

A very well-known female poker pro and Greek-native Maria Lampropulos became the first PokerStars Caribbean Adventure (PCA) Main Event winner in January. She took home a colossal 7-figure amount of $1,081,100 (~INR 7.55 Crores) overcoming a field of 582 entrants which was obviously studded with a plethora of world’s best pros. She also won a Platinum Pass along with the 1st place cash prize, and will be accompanying hundreds including 8 Indians at the 2019 PSPC ME in Bahamas. The PCA win is till date her biggest win till date and had made her live earnings touch $3.8 million mark when she won it.

The biggest tournament series of Australia at the time, the 2018 Aussie Millions, kicked off on 17thJanuary and was a highly anticipated one of this year. The series saw some of the best pros from around the world heading to the Eastern Hemisphere to sign up for the series. The Main Event saw English pro Toby Lewis being crowned as the champion, taking home AUD 1,458,198 as 1st place cash prize outlasting a 700-strong field. The upcoming 2019 Aussie Millions is also going to be the biggest yet series of Australia and is likely to attract a record field of Indian players.

In one of the most unfortunate events of the year, People’s Republic of China blocked all websites and social media apps offering Texas Hold’em poker games in April. The move dealt a major blow to a lot of big companies, among which the Hong-Kong listed Boyaa Interactive’s shares took the biggest hit in the market of over 12% downtick. China has a well-known reputation of blocking foreign websites like Facebook and YouTube, sometimes being referred to as ‘The Great Firewall of China’. Something very similar had happened in the US too a few years ago where the federal government imposed a ban on all poker websites overnight. This incident is often called the ‘Black Friday’ and is one of the lows in the game’s history.

The global gaming giant The Stars Group (TSG) made an awesome deal of $4.7 billion in April to acquire the UK-based online gambling company Sky Bet. This news sent shockwaves in the industry for the enormous amount it saw. This development was the biggest of the company’s acquisitions, following the TSG’s purchase of majority stake in CrownBet in February this year and buying the entire operations of Australia’s William Hill in March later.

In May, two female poker players Maria Ho and Lupe Soto were inducted into the 2018 Women in Poker Hall of Fame. Maria Ho, a 35-year old Taiwanese player, is also a television personality and a show host in her country. She had nearly $3 million in total live earnings when the induction took place. Her highest live cash came in 2011 WSOP event finishing 2nd for $540,020. Lupe Soto was a professional therapist and social services administrator before leaping into the poker world. She didn’t have much live poker experience, but she still founded a very respected organization called the Ladies International Poker Series (LIPS) as well as several other women-centric poker programs encouraging more women to try the skill-based game, which is still a male-dominated environment. This was a memorable moment for both women!

The fallout of China’s complete ban on online poker reached Macau too, which is a part of the Chinese sub-continent and operates as an autonomous territory. Macau’s government also shut some of the casinos down in the region sometime in mid-2018. This news affected major parties involved in hosting international events. The Asian Poker Tour (APT) Finale had to shift its venue from Macau to Manila, Philippines, due to the unwelcome move by the government. PokerStars LIVE’s City of Dreams and the Galaxy Macau poker room were among those that shut down.

The shockwaves of the pan-China ban on online poker also reached Hong Kong after touching Macau earlier. Hong Kong is also an autonomous region situated along China’s East Coast and PokerStars, the leading giant in the online poker industry decided to stop its entire Hong Kong operations on May 23. Their original reason behind the move wasn’t mentioned but they sent a nominal email to their players stating the basic. “The Stars Group frequently reviews commercial and regulatory developments around the world,” was some reasoning given in the email.

In late May 2018, the Super High Roller Bowl 4th edition went underway. Justin Bonomo, American poker professional, took home $5 million for winning the SHR Bowl 2018 in Las Vegas. He did a double with this win, having previously won SHR Bowl China in March earlier too for upwards of $4.8 million. Bonomo was the most skilled poker player on this planet in 2018, because a few months after winning the SHR ’18 Vegas, he won $10 million as 1st place cash prize in Guy Laliberté’s The Big One for One Drop of 2018 World Series of Poker (WSOP). Entering the year, he wasn’t even ranked in top 20 All-Time Money List but he instantly took the throne with the $10 million win, beating Negreanu’s earnings by a decent margin. What a historic year for this player!

Topping off this list is a major headline in the global gaming industry. United States Supreme Court declared sports betting to be legal across the country, stating that the previous federal ban on sports betting is not consistent with the Constitution. The Professional and Amateur Sports Protection Act (PASPA) was a law that prohibited traditional sports betting across all states of USA, except in Nevada. Immediately after Supreme Court’s ruling, the multi-billion-dollar illegal industry received a major relief and subsequently boosted tax revenues from the industry too. Justice Samuel Alto summarized this historic judgment saying, “The legalization of sports gambling is an important policy choice, but the choice is not ours to make. Congress can regulate sports gambling directly, but if it elects not to do so, each State is free to act on its own.”

Keep reading GutshotMagazine.com for PART 2 of this list and for your daily dose of poker news from around the world.