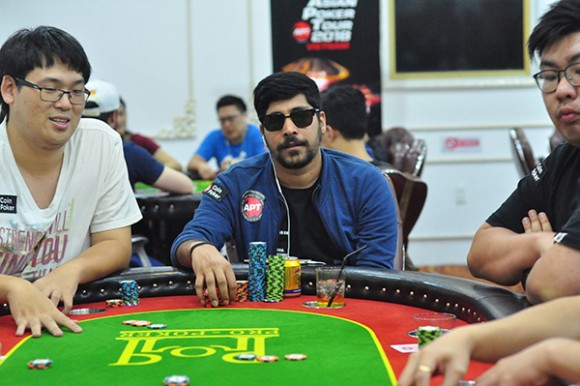 The Asian Poker Tour (APT) currently has a stop at the Pro Poker Club in Ho Chi Minh, Vietnam. Apart from a few deep runs in side events, a whole lot of Indian poker pros have also qualified to Day 2 of the APT Vietnam Main Event, which will kick off in a few hours from now.

From the first starting flight, 7 Indians qualified and yesterday, Nikita Luther bagged the chip lead from the Day 1B survivors, where a total of 4 Indians progressed. Day 1C however, saw a massive turnout as a total of 105 players progress to Day 2, including a contingent of 13 Indian players. Luther has the biggest stack among these 24 Indian players and is the overall Day 2 chip leader as well.

Like 1B, Day 1C also saw a female player ending as the chip leader, as Mei San Ang bagged a total of 292,200 in chips, finishing the day as the best from among the 236 entries. For Team India, Nishant Sharma ends with the biggest stack of 213,200. Sharma is most known for his record-breaking 32nd position finish at the WSOP 2018 Main Event. How far do you think he can go here in Vietnam?

The Main Event has so far generated a combined total of 471 entries with 195 players advancing to Day 2, and the prize pool reaching around VND 9 billion. Registration will close a little later on Day 2 and we can then have an official number of the prize pool and the top prizes. Keep reading GutshotMagazine.com for updates from the APT Vietnam Main Event.