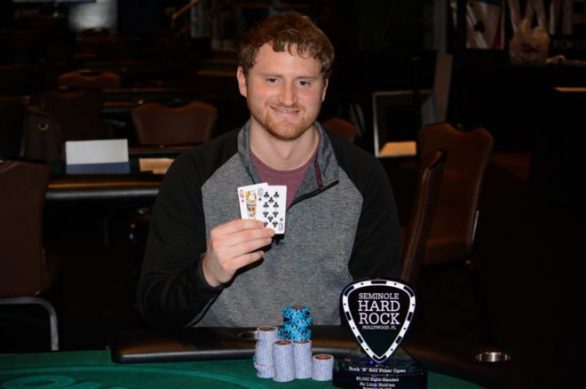 David Peters is a name that’s been ringing in many poker players’ ears, especially this year. The man needs absolutely no introduction, who currently ranks 5th in the world in the All Time Money List. He is a top-notch poker player having won a ton of titles since the time he began playing live back in 2006. His 2018 record is studded with six 7-figure wins, and that is a litmus-test for how skilled one is as a poker player, if anything.

Returning from his two major wins just recently, one at the Caribbean Poker Party and other at Aria Fall Madness, Peters’ latest victory is definitely a major Déjà vu moment for him. He shipped the $5,000 NLH 8-Handed on Nov 26 at the Seminole Hard Rock ‘N Roll Poker Open (RRPO) series exactly 364 days after he shipped the same event at the same venue….wait for it….wearing the same grey sweatshirt! “Isn’t that the same shirt you wore last year?!” Peters’ girlfriend asked after the final card was dealt. “Yeah, it is. I bought you that shirt.”

Peters later reacted to the press saying, “It’s kind of crazy, it was a fun tournament, I’m wearing the same sweatshirt and everything. Things went pretty well at the final table early on. Then I lost a bunch of chips and I battled back and it worked out.”

The 8-Handed event had a $250K GTD and attracted 95 runners, generating a $421,250 (~INR 2.98 Crores) prize pool and crushing the guarantee. Peters was undoubtedly the most accomplished player at the final table, but a few well-known players were in the mix too, including two World Series of Poker (WSOP) bracelet winners William Givens and Joey Weissman. Givens finished 8th and Weissman 4th in the 8-Handed. The 2015 WSOP Main Event champion Joe McKeehen also signed up for the 8-Handed. He eventually cashed out at 12th place, not making it to the Final Table.

After his win, Peters commented, “I guess sometimes maybe some guys might not be trying to play too many pots with me or might avoid marginal situations. So, I can sometimes take advantage of that. On the flip side, you have some guys that are ready to battle. I don’t think any of these guys were scared or anything like that.” This was Peters’ seventh title and 24th Final Table finish of 2018.