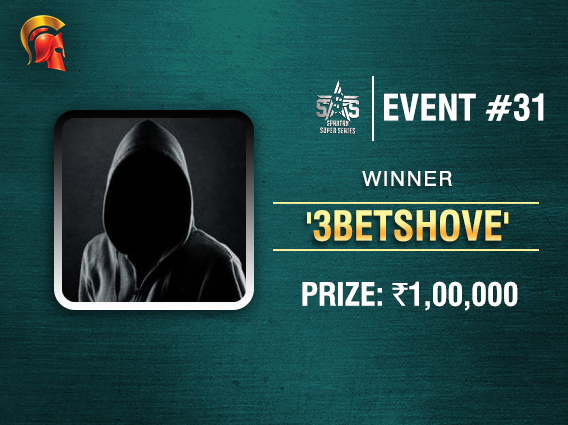 The final event of Day 6 of the Spartan Super Series (SSS) drew in 249 entries and after a five and a half grind, it was ‘3betshove’ who was declared as the winner of this tournament.

36 players from the 249 entries would make the money in this SSS Event #31 taking place at The Spartan Poker and min-cash was INR 3,250 for those afore-mentioned 36. Plenty of tough competition in the field including Anirban ‘pokernoob‘ Das who has been having a brilliant run in this edition of the SSS with three title wins thus far. He almost made it to the final table in this tournament but ended up busting in 10th place. Another title winner, fresh from his win earlier in the day, in fact, was ‘ForAyushi’ who finished in 5th place for a payday of INR 30,000.

Another former SSS title winner was Ankush Aryan playing as ‘invinciblewolf‘ who was hoping to score his first for this edition but his short stack was knocked out in 3rd place (INR 47,250). Chipleader 3betshove was responsible for that elimination and moved his commanding stack to 2.4 million going into headsup against ’99ayka99′ who held 928k. It was the start of a long and determined battle which saw 99ayka99 not only close the gap but take the lead when his full house crushed 3betshove’s set. That pot worth almost 3 million flipped the lead squarely in 99ayka99’s favour now holding a more than 6:1 lead over his opponent.

3betshove bridged the gap a little bit winning a 900k pot but was really able to get into a fighting stack position when he won a 1.4 million pot with two pairs. From even stacks, he took over the lead in the penultimate hand of the tournament when he hit a Ten high straight against 99ayka99’s two pairs. The final hand of the tourney saw preflop raises and 3betshove (6c 3c) hit the flop hard when 6s 6d 6h turned up on the board. Sitting pretty with Quads, he allowed his opponent (2c As) to bet into him and merely called to Ah on the turn.

Worst possible card for 99ayka99 as he made his full house and regardless of the river 9s, all the chips were going into the middle no matter what. They did and 3betshove was rewarded with the biggest pot of this headsup as well as the title win for a prize of INR 1,00,000 while 99ayka99 would take home INR 70,000 for runner-up.