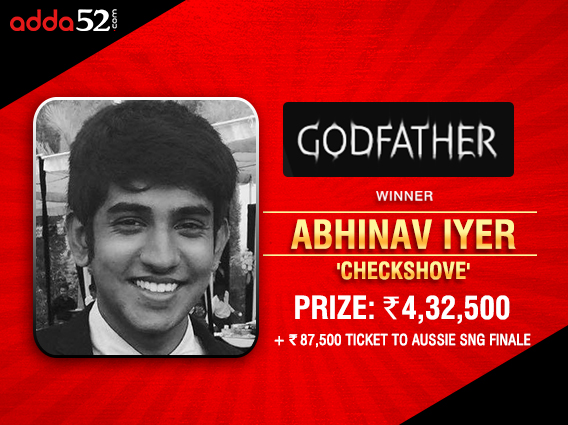 Sometimes, players can breeze through tournaments on Adda52, but sometimes, the battles can become really epic, as it did last night. Godfather is one of their signature tournament series, and currently Godfather 5.0 is underway, where weekly tournaments take place before eight winners compete in the Godfather SnG Finale for a chance to win an INR 7 lakh poker package trip to Australia.

The Godfather INR 20 lakh GTD tournament takes place at 8pm every Thursday night on Adda52 and yesterday’s heads-up battle will go down as one of the most epic ones in Godfather history. Two very well-known Indian pros in Aditya Sushant and Abhinav Iyer faced off in heads-up, with the latter emerging victorious.

Before they reached the 2-way stage, they had another top player in contention in ‘omgwonderwoman’. This player won the Godfather title just a few weeks back, and narrowly missed out on the title once again, which would give him/her a double starting stack in the SnG Finale. Here, omgwonderwoman busted in 3rd for a prize of INR 2,50,000.

There were quite a few other top players in this tournament where everyone paid INR 5,500 to enter. Ultimately, the top 27 players would’ve got a return on their buy-in as they shared the prize pool with a minimum cash prize of INR 12,000 each. However, it was Abhinav Iyer aka ‘checkshove’ who claimed top honours on the night.

He won the top prize of INR 5,20,000, from which INR 87,500 will be deducted towards his entry ticket to the SnG Finale, where he will play Chiraag Patel, Sanjay Gupta and other top players for the INR 7 lakh poker trip to the Aussie Millions. Aditya Sushant aka ‘A_Sushant’ had to settle for the runner-up prize of INR 3,30,000 last night.

“Feels great to win the Godfather! Was shortest when the FT started but always knew could make a comeback! Probably the toughest HU match till date against Sushi! Australia is one of the best places to travel and play poker. I was planning the trip anyway. Will be sweet to win the package,” said Iyer when Gutshot spoker to him after this win.