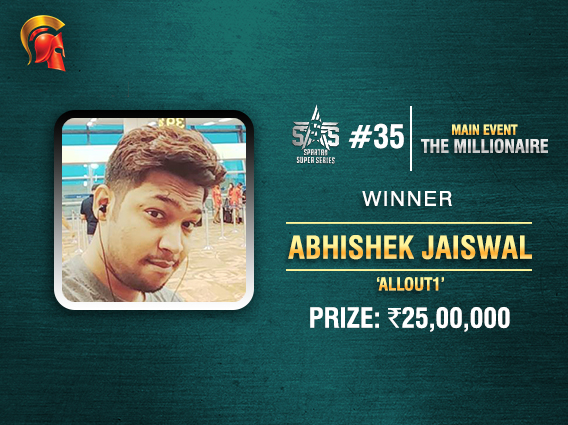 It all boiled down to this on The Spartan Poker. Seven days of exciting poker action, where there were many winners crowned, but everyone was waiting for this one. The SSS Main Event. For the first time ever, Spartan’s signature monthly tournament ‘The Millionaire’ was clubbed in as the SSS Main Event.

The Millionaire needs no introduction, being India’s biggest online poker tournament and offering an INR 1 crore guaranteed prize pool on the second Sunday of every month. Yesterday, the tournament served as the SSS Main Event as well, with its regular buy-in of INR 7,700.

SSS Event #35 Main Event – THE MILLIONAIRE – INR 1 Crore GTD kicked off at 6pm last evening and this turned out to be one of the longest grinds for all those who reached the Final Table and further. It wrapped up at 8:09am after a 14-hour grind and after most of us here at Gutshot got a good night’s sleep and were reporting for work today morning.

Some of India’s top poker pros were a part of the 1,271-entry field and it always takes a great effort to come out on top of this field and win The Millionaire. This month, it was Abhishek Jaiswal aka ‘allout1’ who outlasted all the other entries to win the life-changing top prize of INR 25,00,000!

The top 120 players were paid out a minimum prize of INR 20,000 in this tournament, but Jaiswal would’ve been the happiest of the lot, having reached this victory after firing two bullets and getting a return of over 160x his investment. He would’ve been over the moon with this victory, beating ‘Dark fish’ in heads-up, who also won a massive runner-up prize of INR 15,00,000.

In the final hand, Dark fish decided to go all-in pre-flop with pocket Threes, as his chip stack was less than half that of Jaiswal’s. Jaiswal then made the call with As Jc and as the board rolled out 6c Ad 9d Qd Ac, Jaiswal would’ve jumped for joy as he completed Three of a Kind Aces to win the top and this huge tournament!

Another known player on the Final Table was Bibek Karki aka ‘BIBEK329’ who finished 4th for a handsome pay-out of INR 6,00,000. Finishing in 6th place was Kunal Sharma aka ‘cvc’ who has had a good series, taking away INR 3,00,000 for this run and also ending at #10 on the SSS Leaderboard. 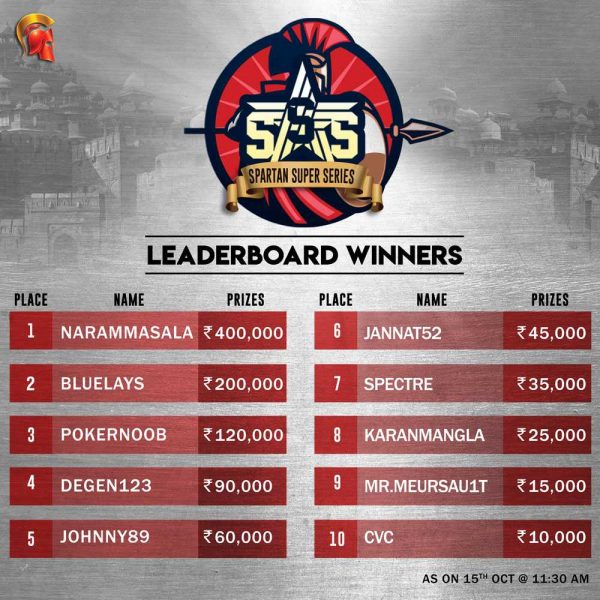