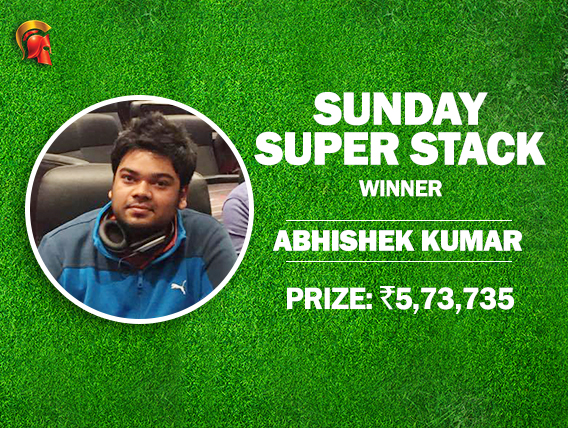 Sunday is always a ‘Fun Day’ on The Spartan Poker, with many high guarantee tournaments taking place. Earlier today, we reported news of Sam Anand aka ‘Lokimon’ winning the INR 5 lakh GTD Big Daddy tournament and taking home nearly a lakh rupees, along with a free package trip to play in the Big Daddy Casino in Goa.

Another big tournament to take place yesterday was the INR 20 lakh GTD Sunday SuperStack tournament, which takes place every Sunday at 7:30pm IST. Yesterday, 433 entries were recorded to the INR 5,500 tournament, which took the prize pool to INR 21.65 lakh.

Kumar had a massive chip lead of 8:1 coming into the final hand and he decided to go all-in pre-flop with pocket threes. His heads-up opponent was ‘EagleSong’ who was quick to make the call, with A-5. The board opened K-Q-7-T-7, giving Kumar two pairs, which was enough to win him the title.

EagleSong wouldn’t have been too disappointed as he finished with a pretty decent score himself – INR 3,57,225 for second place. The top 40 players were ultimately paid out a minimum cash prize of INR 12,990, of which the top four players walked away with 6-figure scores. Gutshot caught up with the winner of the tournament to ask about this huge victory.

He said, “It feels great! Grinding so many tournaments every Sunday with such decent number players, it takes time to reach the final table and then finishing anything other than first leaves the player unsatisfied as the first place prize is such a huge portion of prize pool. Finishing first is amazing always.”

“Spartan tournaments have major guarantees, and all the major ones have deep structure which suits my play. I’m looking forward to playing the IOPC next,” he said further about playing tournaments on Spartan and the upcoming India Online Poker Championship.

Tonight’s featured tournament on The Spartan Poker is the freezeout tournament called the Mega Freeze. Keep reading GutshotMagazine.com for regular updates on what’s happening in the world of poker.