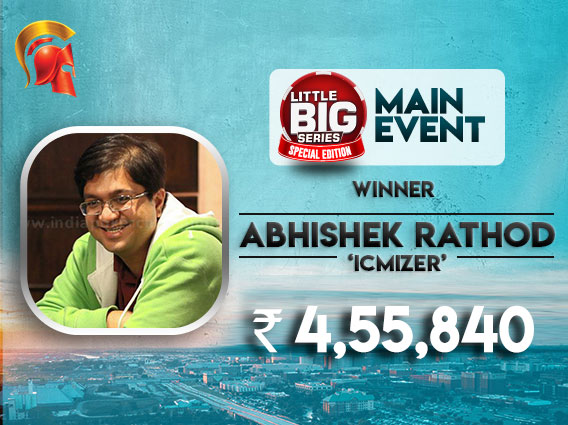 After four days of gruelling poker action at the virtual felts of The Spartan Poker, we’ve finally reached the end of the Little Big Series (LBS) Special Edition. Of course, Spartan decided to save the best for last with the LBS Main Event scheduled for yesterday, the last day of the series.

The fourth and final day saw LBS #16 Main Event INR 20 Lakh GTD kicking off at 6pm last evening, with a massive field of 352 entries registering to the INR 7,700 buy-in tournament. This broke the guarantee and created an increased prize pool of INR 24,64,000 which allowed the top 54 players to be paid out a minimum cash prize of INR 11,088.

This was the first time ever that Spartan held such a big Main Event for the LBS and it was quite a big success as a few players walked away with handsome prizes. The biggest winner of the night was Abhishek Rathod aka ‘icmizer’, a well-known player who topped the field to take away a brilliant top prize of INR 4,55,840.

The two players were nearly equal in chips and both players betted till the turn as giraffeganger_1 decided to try and pull off a major bluff in this final hand. Once the river card open, the player went all-in and Rathod didn’t hesitate in making the call. He held 9h Qc and with the board opening 7s Qd 9s 5h 2d, he won easily with Queens and Nines over his opponent, who just had a pair of Fives to show off.