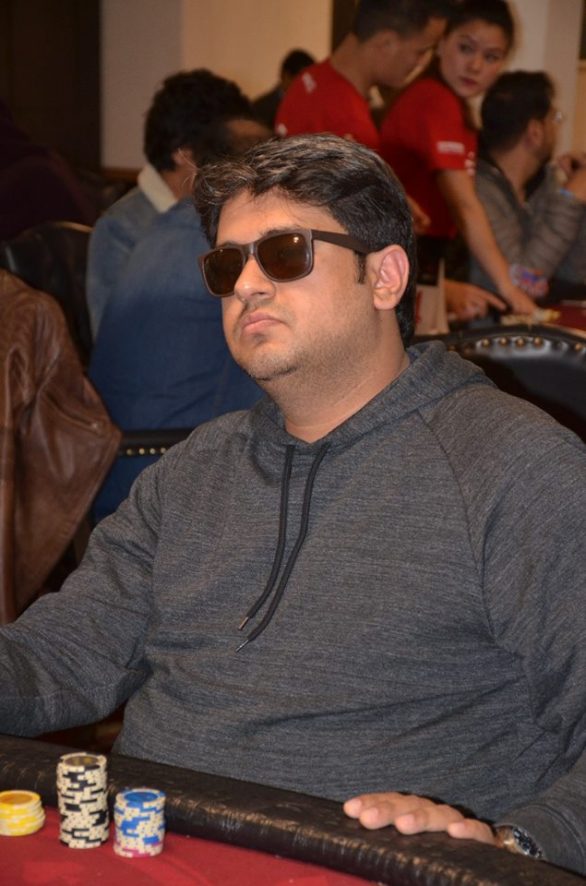 After Day 1 of Deltin Poker Tournament Xpress (DPTX) hosted in the serene city of Gangtok in Sikkim, Day 2 began with a bang yesterday by conducting the INR 15k Main Event. A handful of well-known names of the community were to be seen in the field and a few female players also made their way to the felts.

After Debashis Bal won the Opener day before, yesterday’s Main Event saw a total participation of 64 entries out of which only the Final Table of 9 survived till the end. There was a Shot Clock for this event, so the game was fast. Leading the FT was Abhishek Sharma (pictured below) who bagged 401k chips.

The tournament began with a starting stack of 20k. Only two re-entries per player were allowed and late registration remained open till Level 6 (each of 25 minutes). Many recognizable community names were to be seen in the field including Adda52 Celebrity Pro Minissha Lamba, and other female poker players Babita Agarwal and Uttara Mehta.

Bhola Sharma, inaugural DPTX ME winner was also in the mix to defend his title and has reached the FT. He’ll be looking to make his second DPTX ME win today. The tournament went very quickly and gradually the field whittled down, after some tough poker play, to 38 entries at the start of Level 7 and Jasdeep Nagpal and Anant Purohit were in lead at this point. In the next level, Lamba was busted by Nagpal’s two-pair out of the money.

Top 9 places would be paid in the event. Local pro Pema Ladakhi became the bubble boy, busting at 10th place against Sharma, the eventual chip leader. The Final Table was formed by then and play was halted for the next day. Female player Radhika Shankar has also bagged up 18k chips at 9th position in chip counts on the FT. Regular Sajjan Barnwal is also featuring on the FT, trailing behind Sharma with 303k chips.

The remaining players will battle it out today at 3 pm at Deltin Denzong for the kill shot of INR 3.25 Lakhs first-place cash prize. Stay tuned to GutshotMagazine.com as two more events in DPTX are left and we aim to bring you the best first updates on it.