Adda52 is a leading brand in online poker in the country and not too long ago, they decided to sign on Chris Gayle as their brand ambassador, a cricketing sensation who is referred to as the ‘Universe Boss’. The Jamaican has been actively pushing out the brand through events and social media in the last couple of months.

Yesterday, 24th October 2018, the company organized ‘Poker Nights with Gayle’, an exclusive Diwali extravaganza at Mayfair Banquets in Mumbai. The event turned out to be a unique experience for the media and poker enthusiasts present at the venue. A few even enjoyed playing the skill-based game with Gayle at the end of the night.

It was a fun-filled evening with Diwali celebrations all around and people enjoying playing their favourite game of poker with the Universe Boss. Prior to that, there was also a small media briefing where journalists and other representatives from news channels got to ask Gayle a few questions. Also answering a few questions was Adda52 CEO and Co-founder, Mohit Agarwal.

Sharing his idea behind the event, Agarwal said, “We are India’s biggest online poker community and so we thought why not celebrate Diwali with our huge poker family. We are pleased to have famous celebrities, Adda52 patrons and all the poker lovers with us today. It is such a pleasure to meet everyone under one roof, enjoying the game around the celebratory vibes.” Chris Gayle, who seemed extremely excited about the Diwali Poker party, said, “India has so much to offer and you experience so many new things every day. I am thrilled to be a part of this amazing event. It is astonishing as well as liberating to see the pace at which the poker industry is growing in India and I am delighted to be a part of this revolution by being associated with the leaders in the industry. For me, poker is special because it helps me relax mentally.” Gutshot was present at the event and we asked Agarwal why Adda52 decided to choose Chris Gayle as their brand ambassador. He said, “It was quite an easy decision actually. We thought of cricket when we decided we needed someone to help us endorse our brand Adda52 better, as cricket is followed like a religion in our country. We needed someone who is loved as a cricketer but someone who also knew his poker well, so Chris was the first name that came into mind.”

We also asked Gayle about his poker experience and who he started playing with in India. He said, “It began way back in 2008 when I was here for the inaugural Indian Premier League (IPL), playing for Kolkata Knight Riders. The days we were off, we used to sit in the room and play poker all night, starting from 8pm. We used to be up all night and sleep all day. The guys who I used to play regularly with were Ashok Dinda, Rohan Gavaskar and a few others.” 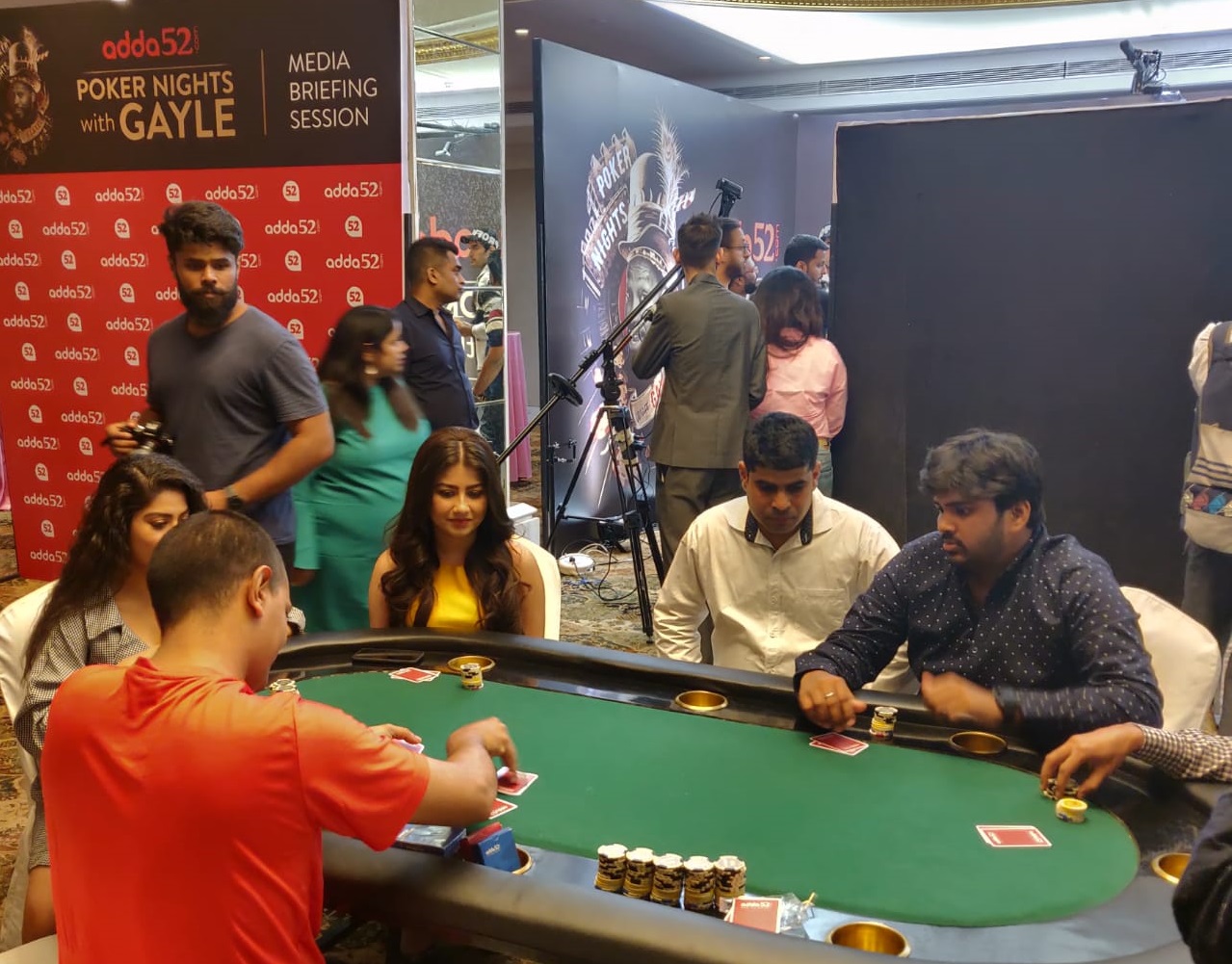 Adda52 then live-streamed the poker table where some top people played with Gayle, including the likes of Minissha Lamba, Aditi Bhatia and others. Bollywood actress Lamba is a known player around the circuit since a few years now and is also an Adda52 Team Pro. She, along with the rest, played for an INR 3 lakh prize pool before those present at the event headed out for some dinner and drinks.

Here are some more images from the event: 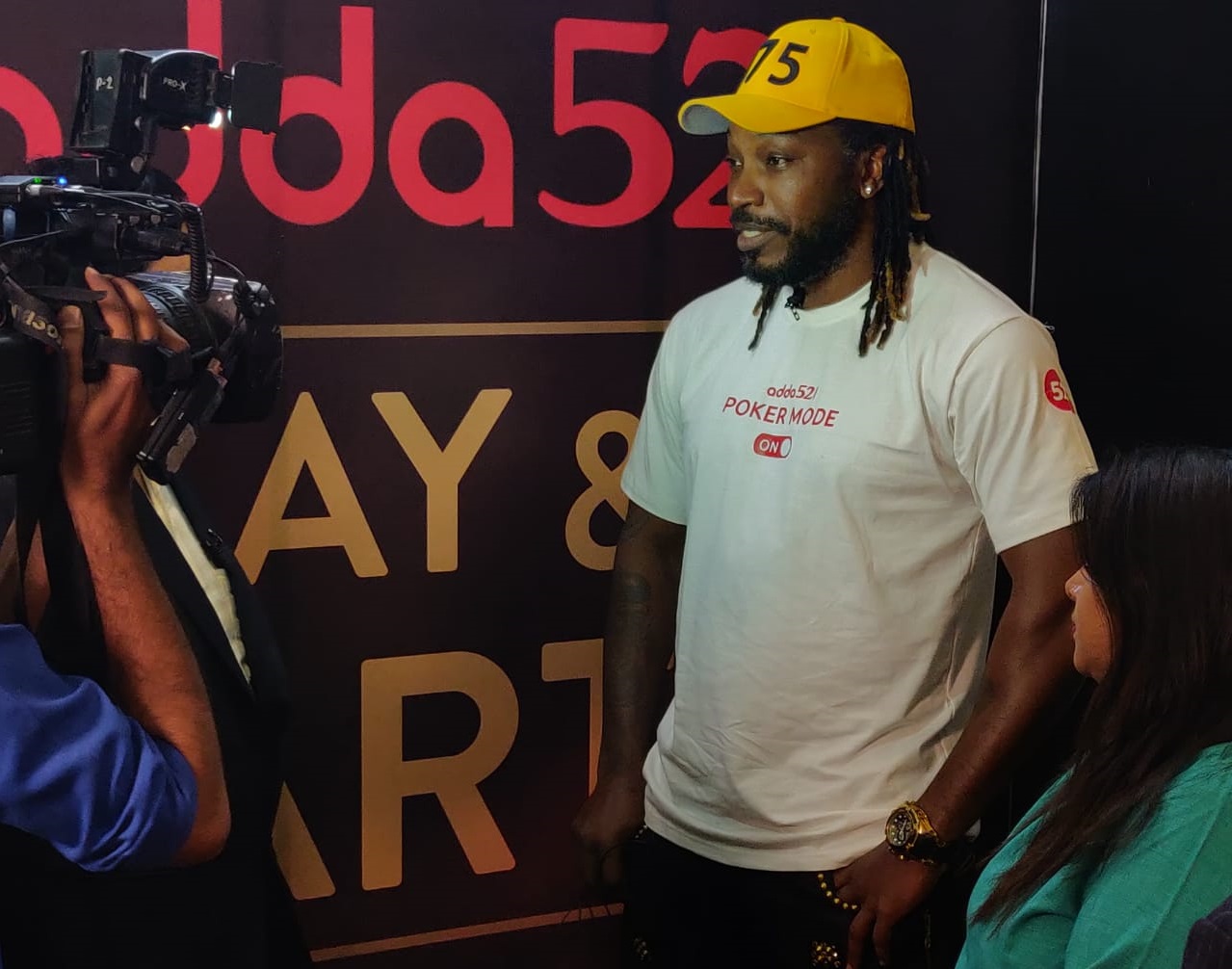 For similar updates on the poker scenario and the latest poker events in India, keep reading GutshotMagazine.com.