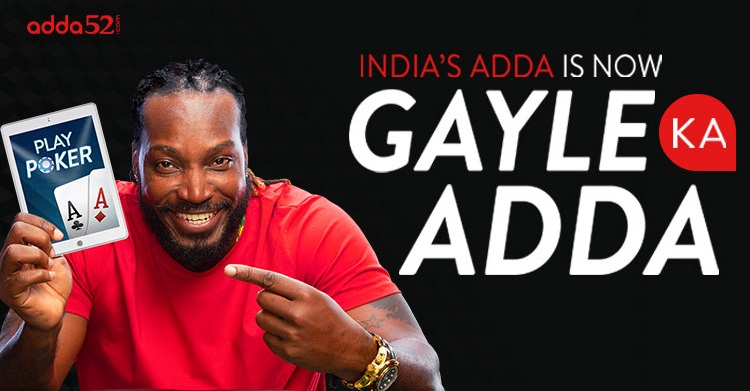 Most of you may already know that popular West Indian cricketer Chris Gayle was signed as brand ambassador of Adda52 last month. Adda52 is one of India’s biggest online gaming portals and choosing the ‘Universe Boss’ as their ambassador was never going to be a wrong choice.

Since then, they even launched a tournament on his name called the ‘Gayle Storm’, the second edition of which will be played on 7th October 2018, with an INR 75 lakh GTD prize pool. Now, the company’s latest integrated ad campaign called ‘#GayleKaAdda’ has got everyone hooked, with a focus on how poker brings the nation together.

The #GayleKaAdda film features Chris Gayle and Bollywood actor Manjot Singh (famous for movies like Student of the Year, Fukrey and more), wherein the duo battles it out in a game of online poker. It focuses on the growing trend of people playing online poker in India and around the world, while also displaying the fun and thrill elements of the sport.

The ad campaign has been live on social media since yesterday, while also on offline channels like radio and OOH. Mohit Agarwal, CEO and Co-founder of Adda52, commented on the campaign, saying, “We are super excited to have Gayle on board with us and launch our first branding campaign with him. Gayle is the perfect fit for the game which depicts nerve and smartness. He is a regular player himself, so it was an easy task to have him open his innings with Adda52.”

Saurabh Kapoor, CEO of agency Hashtag Orange commented on conceptualizing and executing this campaign, saying, “Poker is a fascinating game and because of the mindful skills of the game, it has gone high up on its popularity quotient. With the campaign, we wanted to connect Gayle’s personality and his fun and quirky side with that of game. Our communication also highlights the ease of playing Adda52 online anytime and anywhere. Tying it all together with #GayleKaAdda, a catchy phrase we believe will become a head turner.”

Adda52 gives players a chance to win big daily and today is no exception, with the INR 20 lakh GTD ‘Paycheck’ tournament being played at 7:30pm. Keep reading GutshotMagazine.com for more updates from the Indian poker industry.