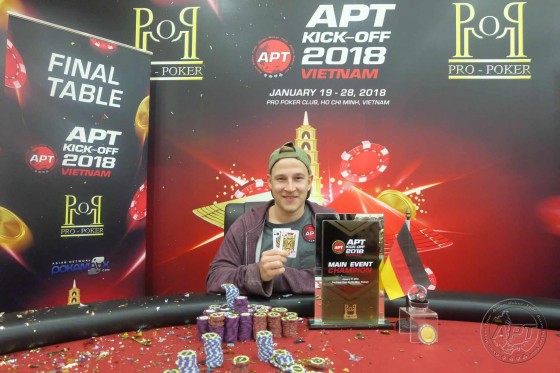 Adinho888 emerged victorious in the Main Event of Asian Poker Tour Kickoff Vietnam 2018 for VND 1,313,920,000 (~INR 37 lakhs). As his friends chanted on “winning pots, taking chips, getting rich, make the money!”, he entered the final day as the chip leader and powered through what turned out to be a 14-hour marathon to the top. The mysterious player who was was not keen to reveal his real name to the reporting staff at the venue and chose to go with what his likely his online handle. Adinho888 captured his first-ever APT championship title and was awarded the APT Championship Trophy, the APT Championship Ring, and of course the first place prize. This incredible achievement also earned him more than enough points to win the APT Player of the Series.

The Main Event resumed with the final 27 players out of the record-breaking 664 entries back at the Pro Poker Club in Ho Chi Minh City for their last big hurdle to the finish line. Among the early dropouts were the last two decorated APT Main Event titleholders in the field, Harry Duong (22nd) and SooJo Kim (19th), which then set up the final two tables. During this time, the leadership status switched several times with Dmitrii Ilin, Flo Campomanes, Dong Anh Dung, and Nguyen Hoang Anh all getting a taste.

Adinho’s first victim at the final table was Macaron Tan. Tan shoved with 2♥ 2♠ and fell to Adinho’s Q♣ Q♦. Adinho followed it with a massive double up through Nguyen getting maximum pay for his full house. With progressive bets to the river, the board completed 2♣ 4♥ 8♥ 6♠ 6♣ and Adinho held 8♣ 8♠.

The next to fall was Lam Kim Long in 4th place with his Q-10 finding no luck against Adinho’s A-Q. Taking 3rd was Nguyen who called for his tournament life on the river only to find his A♣ 10♣ is behind Adinho’s A♠ Q♠ on a board of A♥ Q♥ 5♠ 2♦ 2♠. This brought about the heads up round with Adinho ahead in the count against Nghia.

The final duel saw both players with rushes and shining moments. Each one had their own set of railbirds as well cheering on at every pot shipped. But in the end, it was Adinho who endured. The final hand saw Nghia limp in, Adinho raise to 1.6M, Le shove, and Adinho with the snap-call. Le had A♠ 4♠ and was up against Adinho’s J♠ J♦. The flop ran A♣ J♣ 2♥ for top pair to Nghia and a set to Adinho. With the 7♠ turn, it was all over. The A♦ river completed the board and Adinho triumphed with a dominating full house.

Congratulations to Adinho888 for kicking off his New Year in style becoming the first champion of the APT 2018 season and is also the first winner of the newly introduced APT Player of the Series award!