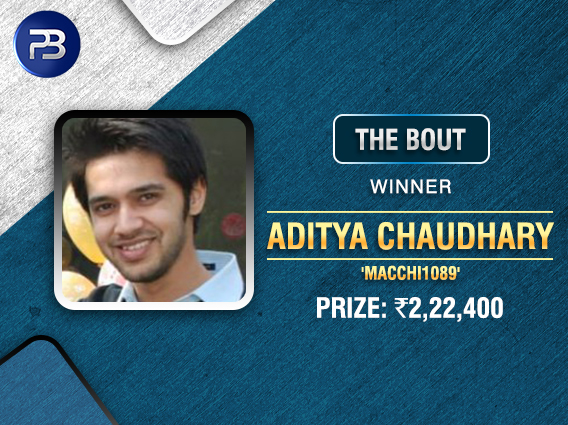 PokerBaazi is a well-known brand in the Indian online poker industry. The company hosts a variety of exciting tournaments all over the year with lots of cash prizes up for grabs. Some tournaments are a regular feature on PokerBaazi and are hosted on a certain day of every week.

One such feature tournament is The Bout, which happens every Monday on PokerBaazi’s platform. It attracts a decent turn-out for an online tournament. The guaranteed prize pool of the Bout is INR 10 Lakhs GTD. But yesterday’s total 278 entries (143 re-entries) created a new prize pool of INR 11,12,000 for a buy-in of INR 4,400.

The player to emerge victorious in The Bout yesterday was Aditya Chaudhary aka ‘macchi1089’. The long 5-hour grind finally paid off for him and he cashed out INR 2,22,400 as 1st place prize among the top 30 who were paid, with the minimum pay-off being INR 11,676. Chaudhary also finished at 1st place a couple weeks ago in the Endeavour tournament on PokerBaazi, cashing out a similar 6-figure amount.

Gutshot got in touch with Chaudhary after his spectacular win. About the final hand, Chaudhary elaborated saying, “In the final hand I opened KQ and my opponent shoved. I called and he had a 33. I flopped a Q and eventually a runner runner nut flush for the win”.

Chaudhary commented “Just a general thank you to PokerBaazi. I don’t remember most of the tournament as I was multi-tabling and some of my friends were playing FIFA in the same room too. So, I was pretty distracted but managed to run good in crucial spots.”

We at Gutshot sure hope this win adds a welcome amount to Chaudhary’s bankroll and enables him to play in more tournaments in the future and with a performance like this, it doesn’t strain the imagination to see him shipping a few more.

Other notables to withdraw cash in the Bout yesterday were Rajat Mahajan aka ‘happyfish’at 6th with INR 51,152 and Neeraj Kumar at 27th.

Chaudhary had also shipped a Destiny 5.0 tournament, an INR 20 Lakhs GTD tournament hosted by The Spartan Poker, in July this year, under the handle ‘S1ckB3at’. He overcame a field of 442 entries at the Destiny and took home a massive INR 5,85,650 in cash prize.

Keep reading GutshotMagazine.com for more tournament updates and general poker news from around the world.

Don’t have an account on PokerBaazi? If you wish to play and become a big winner of their massive          tournaments and promotions, sign-up now by clicking HERE.