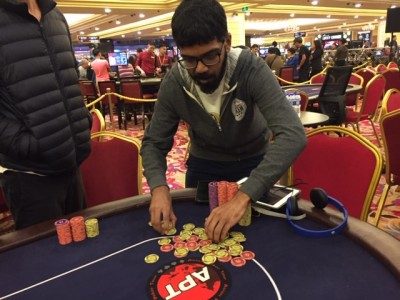 Everyone knows Aditya Sushant in the Indian poker industry. Arguably one of India’s best pros and well known for becoming the first Indian to win a WSOP gold bracelet in Las Vegas, Sushant slays in poker, whether online or live. With over half a million dollars in live poker earnings, the pro seems unbeatable when he’s on a run, and now, he’s all set to add to his career winnings.

The Asian Poker Tour (APT) is currently hosting the APT Finale 2018 Manila which is their last stop of the year, between 27 November and 6 December 2018. Being contested at Resorts World Manila, the series has had a number of high value tournaments and many Indian players were also in attendance.

Currently, we have completed Day 2 of the APT Finale Championships Event in Manila which saw a very low turnout of 71 entries. What was scheduled to end tomorrow is all set to end later today on Day 3 as we’re down to the Final Table of 8 players. India’s Aditya Sushant is also present on this Final Table.

Sushant was accompanied by Baadshah Gaming co-founder Madhav Gupta for most of Day 2, but sadly, the latter busted out towards the end of the day. Only the top 12 players were to be paid out so Maddy missed out on taking away a cash prize, but Sushant on the other hand, is certainly taking away a big prize.

The FT will resume today on Day 3 at 1:30pm local time with the blinds running at 3k/6k big blind ante 6k, and the current level clock counting down 14 minutes and 42 seconds. Sushant was building towers of chips on Day 2 but lost a couple of big flips before bagging up on Day 2.

Sushant and Australia’s Bobby Zhang were in the lead for most of the day, but the latter managed to keep his advantage, ending as the chip leader with a monster stack of 1,001,000 chips. APT Korea Championships Event winner Iori Yogo is also in the mix, third in chips with a stack of 652,000. Sushant is currently 6/8 with a stack of 188k.

From here, the minimum pay-out that the players will receive is PHP 383,000 (~INR 5.12 lakh) for finishing 8th, but everyone’s eyes will be on the top place prize of PHP 2,872,800 (~INR 38.46 lakh). We wish Sushant the best of luck for the FT and we hope he brings the APT trophy back to India. Keep reading GutshotMagazine.com for more updates.