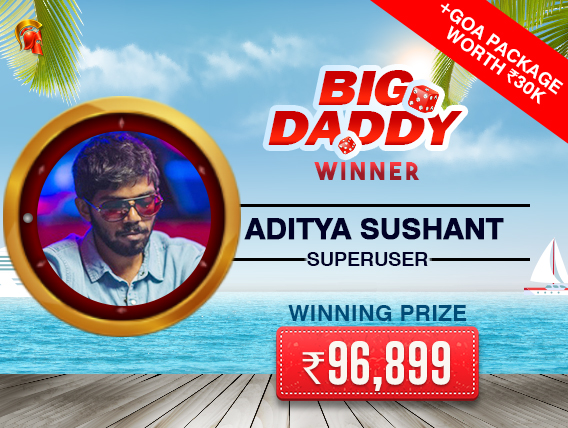 The Spartan Poker is one of India’s top poker companies and just last month, they launched a new tournament offering called ‘Big Daddy’ which is scheduled to take place every Sunday. The winners of these weekly tournaments take away not just the winning amount, but also a travel package to Goa, worth INR 30,000!

Yesterday’s winner was none other than Aditya Sushant, one of India’s best poker players and India’s first bracelet winner at the prestigious World Series of Poker in Las Vegas. Playing under the name ‘SuperuSer’, Sushant was victorious yet again, adding to his long list of online poker titles.

The specialty of the tournament was that the winner can fly to Goa to play in the Big Daddy Casino (recently taken over by Team IPC) with a buy-in as low as INR 550. Yesterday, the tournament kicked off at 4 pm, beating the INR 5 lakh guarantee thanks to the field of 1,012 registered entries (587 unique players). It concluded in slightly over 5 hours, with Sushant taking home the top prize of INR 96,899.

To go with that prize money, Sushant also wins a 2-night hotel stay and a free entry to the Big Daddy Casino in Goa, courtesy The Spartan Poker. ‘Sansh06’ reached heads up against Sushant and eventually, his pocket twos weren’t good enough for Sushant’s A-5 in the final hand. The board opened A-8-7-6-7 and Sushant took down the title with a bigger two pair – Aces and Sevens. The tournament was at level #41 when it concluded, with blinds running 25,000/50,000 – 5,000.

Sushant created history last year by becoming the first Indian to win a WSOP gold bracelet and he has expressed his plans of flying to Las Vegas this weekend, to try and recreate the magic of last year. He has been on a hot run in recent months, both in live and online poker. Keep reading GutshotMagazine.com to know how well he does at WSOP 2018.