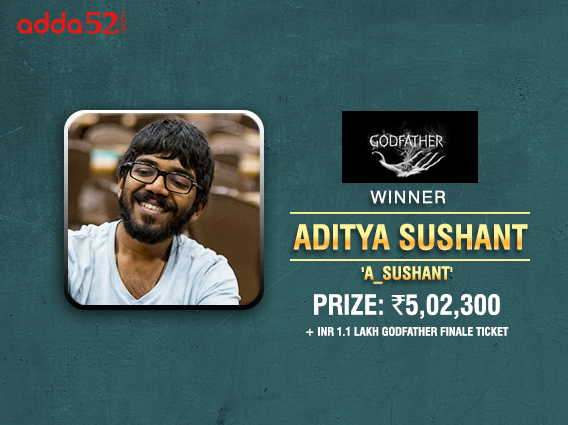 Yeah, the title may say that this is Aditya Sushant’s first Godfather win on Adda52, but he’s a player who has accomplished almost everything else in poker, both in live as well as online tournaments. Shipping poker tournaments is nothing new to him, with titles on most of the major poker websites, while also being known for becoming India’s first WSOP gold bracelet winner, winning the Teams Event last year.

So yesterday would’ve been just another day in the office for the pro, as he decided to play in the Godfather tournament on Adda52, which is part of a series that allows one player every nine weeks to win an INR 10 lakh package trip to Europe. Sushant shipped this tournament last night and he became the last winner of Godfather 4.0, with the SnG Finale to be played on 2nd September.

INR 1.1 lakh will be deducted from his prize money towards a ticket to the Godfather SnG Finale, where Sushant will play with 8 other players for the INR 10 lakh package trip to play poker in Europe. Now that will be one tough tournament, with a quite a few top pros in the mix, including Vivek Rughani, who shipped last week’s Godfather tournament.

Sushant plays under the username ‘A_Sushant’, and he steamrolled his opponents in this tournament, beating ‘realkidsanju’ in heads-up. It came to an end at 3:08am this morning and realkidsanju had to settle for the runners-up prize of INR 3,88,575. For Sushant, he added another feather to his cap of achievements in the world of poker.

Gutshot caught up with Sushant after he took down this major tournament. He said, “This was my first Godfather win. I got the chip lead when there were two tables left and never relinquished it. I started the Final Table with a decent chip lead and didn’t lose any big pots, running good where it mattered, which helped.”

Keep reading GutshotMagazine.com for more updates on the top poker tournaments in India, both online and live.