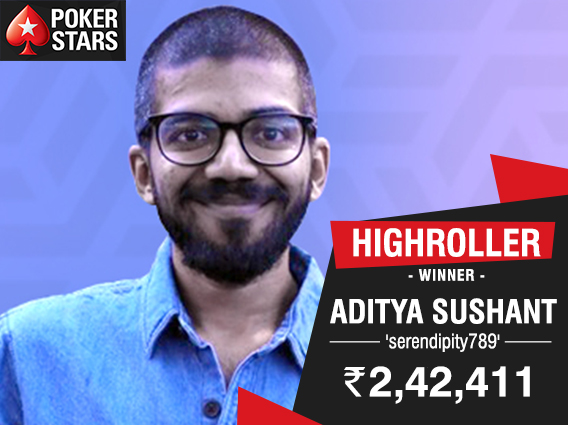 Aditya Sushant is one of the veteran players of the Indian poker community. He was already a top-notch poker professional but came into the spotlight following his bagging the first WSOP bracelet for India back in 2017. He has plenty of online wins too, which include feature tournament titles like Spartan Destiny, PokerBaazi Summit etc.

Last night saw Sushant win another significant event in the scene, PokerStars India Highroller INR 12 Lakhs GTD. The tournament began at exactly 8 pm on the platform and attracted a decently-sized playing field of 162 entries (including 71 re-entries) for INR 7.7k buy-in.

Sushant, playing under ‘serendipity789’ shipped the tournament for INR 2,42,411 at 2.36 am today morning, when the final hand of the tournament went into the books. He beat another known regular Abhishek Garg aka ‘TheGrinder333’ in heads-up, who took home INR 1,80,871 as runner-up cash prize.

Sushant has an impressive record to back himself. The current month of March saw Sushant win a significant online title, Adda52 Mega Suits for a wholesome INR 7.2 Lakhs, having also won a seat to Spartan Destiny 8.0 SnG Finale last month. In the live scenario, he finished in the money in the 2019 Aussie Millions Main Event. He extended his stay in Australia following the Aussie Millions and played one of the regular tournament offerings at the Star, Sydney and shipped it too.

Coming to the platform, PokerStars India started in April 2018 and has since then made major headlines. Recently, they signed up Nawazuddin Siddiqui as their brand ambassador and paved way for mainstream poker advertising by televising ads featuring the Bollywood actor on public channels.

The top 27 places were paid for a min-cash of INR 13,678. One of the 8 Indian PSPC Platinum Pass holders and a YouTube and Twitch streamer Sharad Rao aka ‘sordykrd’ finished 8th last night for INR 31,208. Keep reading GutshotMagazine.com for more such tournament results and updates from all leading poker platforms in India and for general poker news from around the world.