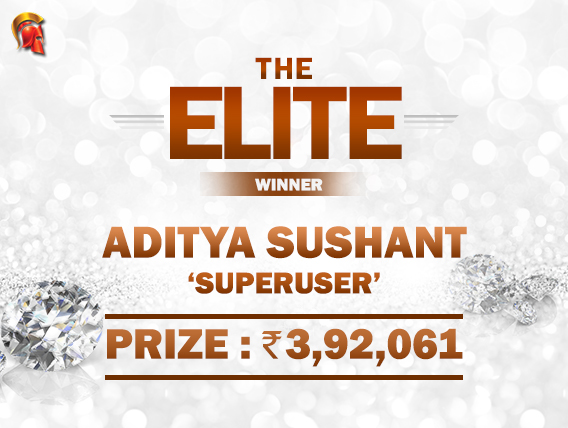 The weekend’s action gets kicked off in high gear with The Elite taking place every Friday evening at The Spartan Poker. This INR 11,000 buy-in tournament promises a guarantee of INR 15 Lakhs and last night that guarantee gor crushed with INR 19.4 Lakhs getting collected in the eventual prizepool courtesy 140 entries who took part. The man who claimed title honours was Chennai’s Aditya ‘SuperuSer’ Sushant who INR 3,92,061 after a chop was agreed on between him and Siddarth ‘PeterPunter’ Singhvi.

20 places were paid out in this tournament with a minimum assured payday of INR 25,996. Sushant, who won India’s first ever World Series of Poker bracelet, been known for his prolific achievements on the live and virtual felts. Signhvi too has had his share of achievements in live tournaments and online including a side event win in the India Online Poker Championship (IOPC).

3-way action took place between these two and Manish ‘thekid’ Lakhotia who our readers will remember won the Electra tournament not two days ago at The Spartan Poker. PeterPunter has the biggest stack with about 1.4 million chips, SuperuSer had 1.1 million and thekid was looking for a few doubles ups from his 264k stack to make a dent in the other two. In Level #38 (9,000/18,000 ante 2,250), holding pocket Jacks (Jc Js), SuperuSer popped it up to 36,000 which for PeterPunter out of the way. thekid (2d Ac) knew it was time to go big or go home and he moved the rest of his stack into the middle which was quickly called by SuperuSer. A board with Ts 4c Kd 8d 2c meant no joy for thekid and with that he was done in 3rd place for a score of INR 2,08,550 making it a very profitable week thus far for Manish Lakhotia.

The remaining players played just one more hand before they decided to chop up the balance prizepool almost evenly with PeterPunter taking in INR 3,89,758 for the runner-up.

Stay tuned to GutshotMagazine.com for more such news updates from the world of poker.