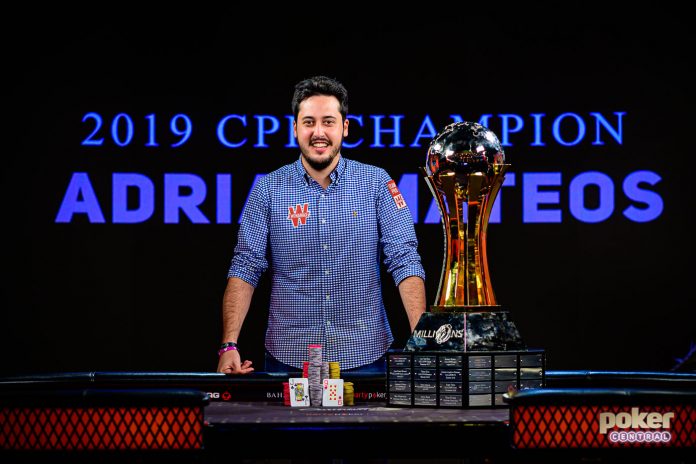 The MILLIONS World Bahamas Main Event is taken down by Adrian Mateos for a jaw-dropping $1.16 million. The youngest player in history to win three WSOP bracelets triumphed the tournament after dodging away all his opponents and winning one of the top tournaments of the current schedule.

The tournament attracted a total of 948 entries and the top 135 places received a portion from an incredible prize pool of $9,480,000 and Mateos aka ‘The Matador’ took away the lion’s share. In the past week, the champion won the MILLIONS Super High Roller for $520,464 as well. Now sitting 1st in Spain’s All-Time money list, the 25-year young champion boosted his total live earnings to an astonishing $19.42 million.

Down to the final table, Gregory Baird was the first casualty after a bad beat. Chris Hunichen found a set for his pocket Sixes pushing away Baird holding his pocket Sevens in 8th place. He was followed by Peter Jetten who busted in 6th place when his all-in met Scott Wellenbach’s pocket Queens.

The three-handed play between Mateos, Aaron Van Blarcum and Hunichen took long hours and eventually the players decided to settle for a 3-way deal. Hunichen secured $1,097,195 and eventually closed his journey in 3rd place. Heads-up began between Mateo carrying a stack of 496 million up against Van Blarcum with 452 million chips. The deal was already made but they were playing for an additional $100,000 to the winner, which Mateos bagged.

For latest updates on poker news and tournaments around the world, keep reading GutshotMagazine.com and stay tuned!