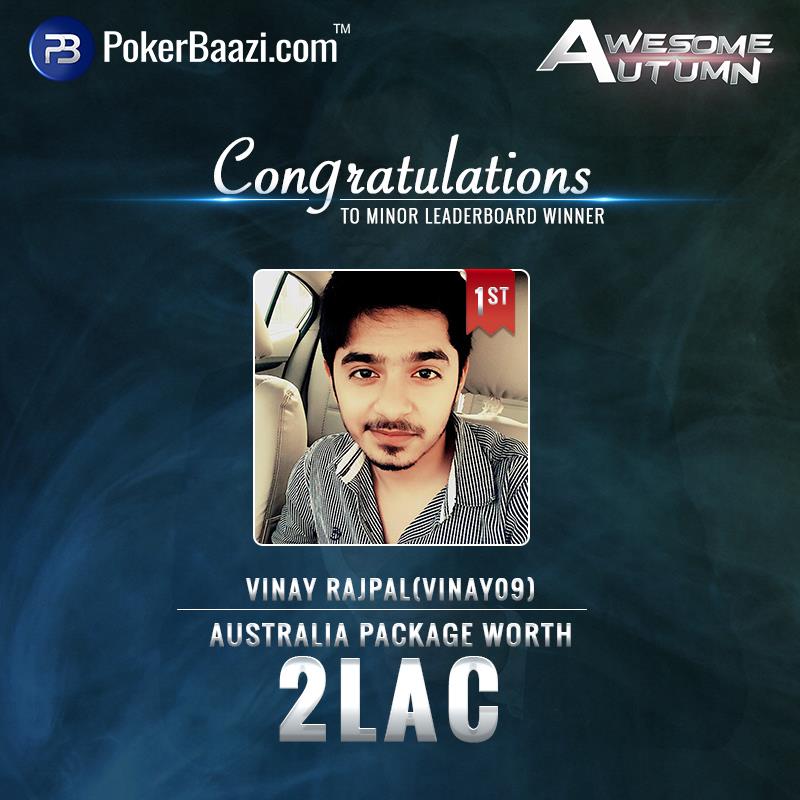 As you all know Ace Race is a leaderboard promotion by Adda52 which has a giveaway of INR 15 Lakh for the whole of the month divided into three parts equally for a period of 10 days each. The INR 15 Lakh guarantee is also split into three parts making it INR 5 Lakh every ten days with the top prize being INR 2 Lakh for every phase.

‘FourteenK’ won the second phase of the leaderboard for the month of September, as he took home INR 2 Lakh. How do you gather the required points? Obviously by performing well in the featured tournaments on Adda52 like The Godfather, Whale, Judwa, The Roar and The Adda52 Millions.

The last phase of the Ace Race for the month of September was won by Akshay Nasa aka ‘vibaks’. Akshay has been on good run for the past couple months as he has won major tournaments and leaderboard promotion on almost every poker room, be it online or offline. Akshay, who also won the Adda52 Millions on Sunday, was second on the leaderboard but managed to finish top by bagging the marquee tournament of Adda52.

Nasa shipped the top prize of INR 6 lakh in the Millions which gave him the lead to top the chart and win another INR 2 lakh as he beat Bhola Sharma aka ‘bhola’ as he was topping the leader board with his wins in last week’s Whale and Judwa. Sharma ended up finishing 2nd on the table, taking home INR 1 lakh but that is not it is he had a good run in the DPT Xpress held in Sikkim where he shipped home the Main Event.

Other notable players who finished in cash in phase 3 of this promotion were Pradeep Singh aka ‘Megafish1’ (6th), who also won the Ace Race 1 for the month of September, Goonjan Mall aka ‘gmtesting’ (8th) and Siddarth Singhvi aka ‘badtameez_donk’ (5th).