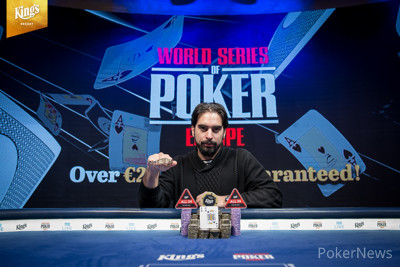 A new world champion has been crowned in King’s Casino, Rozvadov at the World Series of Poker Europe (WSOPE). The action was churning with each player racing to seize Event #14: €10,350 Main Event NLHE and there was tremendous pressure felt by these hopefuls. We finally have our worthy winner, Greece’s Alexandros Kolonias lifting the coveted gold bracelet after defeating Claas Segebrecht in heads-up.

The entire event drew a strong field of 541 entries, and ultimately the prize pool of €5,139,500 was shared among the top 82 places, receiving a minimum paycheck of €15,089. Kolonias outlasted the field and took home the first live tournament win of his poker career. And what were the odds yesterday! The Greek player states that he never plays many live events per year. Accumulating total live cashes of over $3.7 million, Kolonias sits at 3rd in Greece’s All-Time money list bringing the 6th ever bracelet to his home country.

The final table saw 6 poker pros immersed in the competition while the champion began second in the list, closely following Day 5 chip leader Anthony Zinno. Zinno was chasing his 3rd gold bracelet, but eventually busted at 3rd place for €485,291 by the eventual world champion.

Day 4 chip leader Dario Sammartino made a deep run too, quickly dropping to a short stack on the final day. Unfortunately, his efforts weren’t enough for him to grab his career first-ever bracelet, and ultimately resting behind Zinno (4th, €341,702). Sammartino was also 2nd in the WSOP Main Event in Vegas earlier this year!

The time had arrived when the heads-up began with Kolonias carrying 31 million chips against his opponent’s 23 million chips. The match did not last long, the former picked up Ace-King and snap-called against pocket threes. He got a King on the flop, and then caught running spades on turn and river and there it was the winner of the night, celebrating his biggest victory and claiming the first-place prize money of €1,133,678 (~INR 8.96 Crores).

Marking the end of the Main Event, Sammartino and Zinno still have a chance to win Event #15: The Colossus, which is the last tournament of the series. For latest updates on poker news and tournaments around the world keep following GutshotMagazine.com and stay tuned!