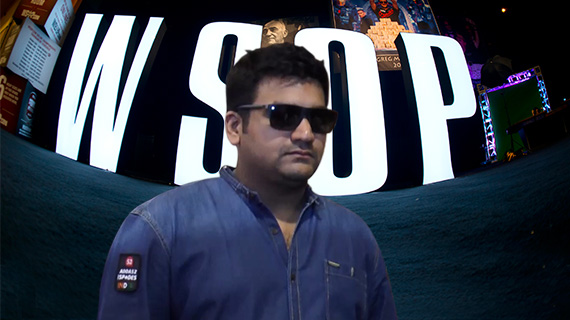 Adda52, one of the leading brands of poker in India, has always boasted the very best poker talents as their Team Pros or as they like to call it ‘Team Spades’. Their line-up currently features the first Indian female to earn the World Series of Poker (WSOP) bracelet winner Nikita Luther, accomplished and well-known pros Kunal Patni and Tarun Goyal. Minissha Lamba is also part of their team, being the first Adda52 celebrity pro.

Jain was one of the oldest Adda52 Team Spades. He jumped on the Adda52 wagon in 2014 with 2017 WSOP bracelet winner Aditya Sushant, who were later joined by Patni and Muskan Sethi. The team later saw Sushant and Sethi leave in 2016, but Jain stayed on, becoming the oldest incumbent Team Spade up until a few days ago when he quit.

The well-established Mumbai-based grinder Amit Jain, along with the above-mentioned names, was also a Team Spade until he decided to part ways with the brand a few days ago. In a social media post, he reasoned about his decision saying: 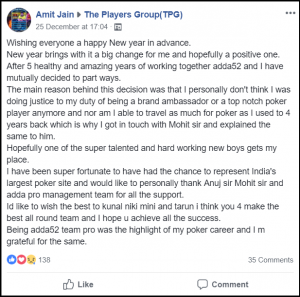 Jain, a businessman by profession, is often described as one of the shining stars in the Indian poker circuit. He has been playing poker since 2009 and his first live cash out was in February 2011 when he finished 2nd in the India Poker Championship (IPC) – 20K Freezeout event. He also finished 7th in the 2018 WPT India Main Event for INR, where Nikunj Jhunjhunwala shipped the title. He likes to travel has plenty of cash outs all over the major poker destinations of the world.

Speaking to PokerGuru in an exclusive interview, Amit Jain elaborated on his reasons for quitting Adda52, “With my kids growing up I have been unable to travel internationally as much as I used to say 4 years back. Back then I would travel 7-8 times a year but now it’s only once and that too for the WSOP. Additionally, I have also moved on to cash games, so my MTT-game is nowhere close to where I want it to be to call myself a pro. Also, I’m currently facing some personal issues as well.”

Jain lastly stated that he won’t be travelling much for poker and he’s still not sure about going to WSOP 2019 which starts in May 2019. He is looking forward to playing live cash games and online MTTs (Multi-Table Tournaments) and is hoping to take it easy for a while.

Keep reading GutshotMagazine.com for similar news as well as tournament updates and general poker news from around the world.