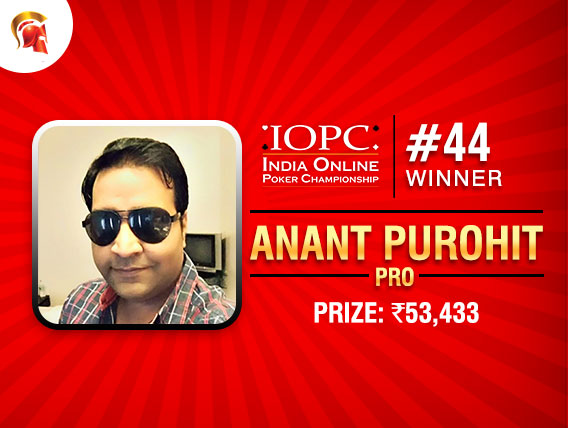 It was an event-packed Friday at the India Online Poker Championship (IOPC) which is currently taking place at The Spartan Poker. The 10 day long series which culminates this Sunday features over 50 events and guaranteed prizepools of over INR 7 Crores for its participants. What’s more there are massive leaderboard prizes for the top point finishers in the series with a magnificent Jeep Compass going the way of the leaderboard winner. Besides this there are other cool prizes like a Bajaj Dominar motorcyle, Bose Sound Bar, Apple Watch and of course cold hard cash on offer for the top 10 finishers of the IOPC leaderboard. One of the players who started off his day well to make a mark on that leaderboard was Anant ‘Pro’ Purohit who claimed victory in the very first event of Day 9 at the IOPC. Purohit is currently at the number 8 spot on the IOPC leaderboard.

A guaranteed prizepool of INR 2 Lakhs (for a buy-in of INR 550) was on offer for the participants in this tournament and that got bumped up to INR 2,66,500 as a result of the 293 entries who played in this event. That prizepool was set to the distributed to the top 39 finishers in the event with everyone assured a minimum payday of INR 1,838. Over the course of 5 hours the field got reduced to the final table and there was one familiar name in there who was gunning for a second IOPC title in this edition. ‘Bikini Babe’ had previously won Event #6 on Day 2 of this IOPC but despite his best efforts fell short getting railed in 4th place for INR 20,973. Purohit was in fact responsible for Bikini Babe’s elimination when the latter’s two pairs, Sevens and Fours were bested by Purohit’s two pairs of Aces and Fours.

After Weedman1’s elimination in 3rd place (INR 25,983) it was time for heads-up between M.Corleone (2.08 million in chips) and Pro holding an ever so slight lead with 2.1 million. It was relatively long headsup battle with neither player giving an inch. Pro, in one hand managed to take a lead when his pair of Sevens bested M. Corleone’s pocket Fives. Pro continued chipping up by picking up small and medium sized pot and opened up the lead between the two stacks.

In the final hand Pro (Tc Kc) and M. Corleone (Qd 9c) both flopped a pair on a flop of 9s Th 3s. The rest of their chips went in and with no help on the turn (6s) and river (3d) for M. Corleone, that was the end of the latter’s run in the first IOPC event on Satruday afternoon. A healthy purse of INR 53,433 went the way of Anant Purohit who will enjoy that and his first title win at the edition of the IOPC. While not getting the title M. Corleone will no doubt find solace in getting off to a good start for the weekend grind with his payday of INR 35,524.