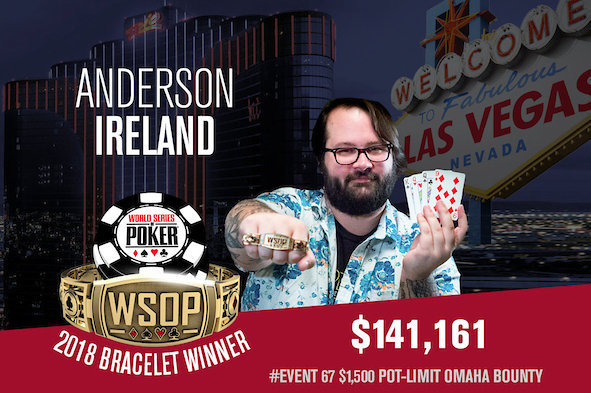 Yet another tournament has ended at the 2018 World Series of Poker, with now just 10 of the scheduled 78 bracelet events remaining. The most recent tournament to end at WSOP 2018 was Event #67: $1,500 Pot-Limit Omaha Bounty, where Anderson Ireland picked up his maiden WSOP bracelet.

Don’t bother trying to do a background check on this player, because this isn’t just his first WSOP bracelet or his first live poker title. In fact, this is his first live poker score, of any kind. The American grinded long hours (including a 4-hour heads-up battle) to beat a huge field of 833 entries.

The PLO Event had $141,161 kept aside for first place and Ireland will proudly take that home, along with his gold bracelet. He had a gruelling heads-up battle against countryman Matt O’Donnell. “That was very, very difficult. That was probably one of the more difficult poker sessions I’ve had. He was excellent,” Ireland said about O’Donnell.

Talking about playing the game of PLO, he said, “I’ve been working on it for a little while. Been playing PLO for eight months now. I have some really excellent teachers who teach me the hard way, by taking my money. They’ll know who they are. I felt very confident the whole way through. Seemed very natural. It is such a better game than Texas Hold’em.”

According to Ireland, this was his 34th live poker tournament and his first ever trip to the World Series. After wearing that gold bracelet, he surely isn’t going to forget this first trip. Keep reading GutshotMagazine.com for more WSOP 2018 updates.