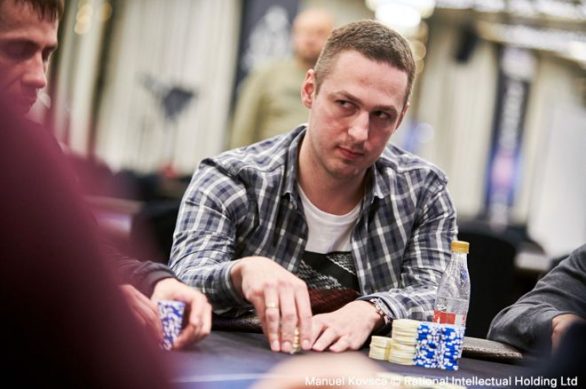 Andrey Lukyanov leads EPT National Sochi after 1A and 1B

The PokerStars LIVE hosted European Poker Tour (EPT) Sochi is underway at the Casino Sochi in Russia. Day 1A and 1B of the RUB 77k EPT National has already gone into the books. Day 1A attracted 249 players out of which only 37 qualified and 1B drew 84 players and 13 survived.

Aditya Sushant entered on Day entered but was eliminated by Andrey Lukyanov (pictured above) who became the chip leader with 500,000 chips. He also currently holds the overall chip lead from all 1A and 1B. Other big stacks to finish on the day include Valery Yantsevich (401k chips), Komil Ruzaev (391k chips) and Tomas Macnamara (386k chips).

Day 1B gathered 84 players in all and saw Russia’s Andrey Chernokoz (pictured below in blue shirt) and Latvia’s Yaniv Peretz in the lead at the end of the day, both having bagged 311.5k chips. Almost 18 levels were played in the event and the field whittled down to top 15 percent, i.e. only 13 qualified. All these players progressed are guaranteed the minimum cash. 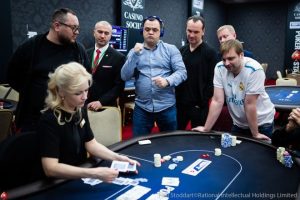 Other big stacks to finish on Day 1B Russians Marat Achilov, Aleksandr Denisov and Mikhail Khabarov with sizeable chip stacks. Top 5 Chip Counts on Day 1B –

These survived players will return on Saturday at 12 pm local time to play EPT National Day 2, where blinds will increase every 60 minutes. Keep reading GutshotMagazine.com for similar EPT news coverage.