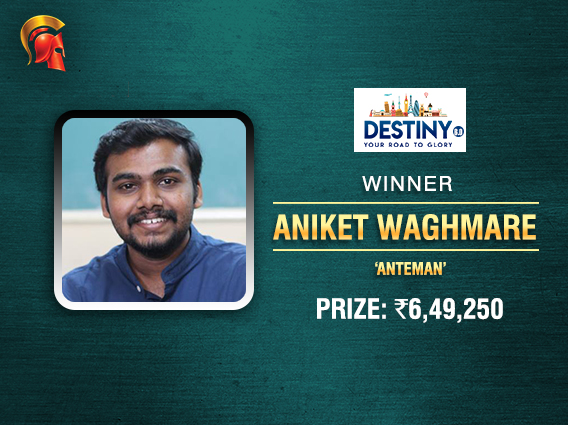 People say you can’t write your own destiny, but The Spartan Poker gives you the chance to do so every Wednesday night. They allow you to buy-in to the Destiny tournament at 7:30pm for just INR 5,500, which you could turn into lakhs of rupees in prize money, plus a ticket into the Destiny Finale.

Currently, Destiny 7.0 is underway and all those who book themselves a seat into the Finale SnG will be playing for an INR 10 lakh package trip to play poker at a prestigious poker festival in Europe, where the winner has further chances to multiply his winnings. So, who said you can’t write your own destiny?

Yesterday was another edition of the Destiny 7.0 20 Lac GTD on Spartan and a massive field of 490 entries joined the competition, with the prize pool being taken up to INR 24.5 lakh due to high participation. The top 40 players were paid out a minimum of INR 14,700 each, but the player who was the biggest beneficiary on the night was none other than Aniket Waghmare aka ‘Anteman’.

Waghmare is slowly inculcating the habit of taking down big victories online, having won 2 SSS titles in October this year (including SSS Destiny too), and then also taking down The Vegas on PokerBaazi earlier this month. Waghmare missed out on the INR 10 lakh package in the Destiny 6.0 Finale (won by ‘Tiger10’), but he has now given himself a second chance.

Regardless of how he performs in the Destiny 7.0 Finale SnG, Waghmare will be a happy man, as he bagged INR 6,49,250 in prize money for shipping last night’s tournament. From here, INR 1 lakh will be deducted as an entry in the Finale SnG. Finishing second was ‘omgwonderwoman’ who also took away a decent amount of INR 4,04,250 for ending as runner-up.

Destiny is one of Spartan’s most popular tournament offering and a lot of top Indian pros take part each week, so Waghmare would’ve been very delighted with this achievement when he went to bed last night. Or we should say today morning, as the tournament ended at 3:56am, ending a grind of over 8 hours.

The final hand was a fantastic one, where both players hit a flush on the river. Before this hand, Waghmare had a 2:1 chip lead but omgwonderwoman would’ve been looking for a double up with his Qs Ts against Waghmare’s Ks 3s. The board opened 8h 8c 9s 5s 2s and after a few smaller bets on the previous streets, omgwonderwoman went all-in on the river with a Queen-high flush, only for Waghmare to make the call and reveal a King-high flush and win the tournament.

When Gutshot spoke to Waghmare after the win, he said, “After winning in Destiny 6.0 I had a really bad run of cards in the finale SNG and busted quickly. I really wanted to have another shot at it. So yesterday, I decided to play only one tourney to focus on winning and it paid off. I had my fair share of luck and reached the FT with chip lead. With some swings on FT I reached HU with a 3:1 chip lead against ‘omgwonderwoman’. He played good all along but ran pretty bad against me. In the final hand, I rivered a King high flush and he called with a Queen high flush. All in all, a good day! I am looking forward to playing the Destiny Finale SNG once again and hope to do better this time around.”

Among the many top names in the money were Abhishek Jaiswal aka ‘allout1’ who is best known for being October 2018’s ‘The Millionaire’ winner on Spartan, bagging a massive prize of INR 25 lakh. Here, he ended another impressive run in 3rd place for which he took home INR 2,45,000.

For more updates on the Destiny 7.0 tournament series as well as updates on other poker tournaments from around the world, keep reading GutshotMagazine.com.