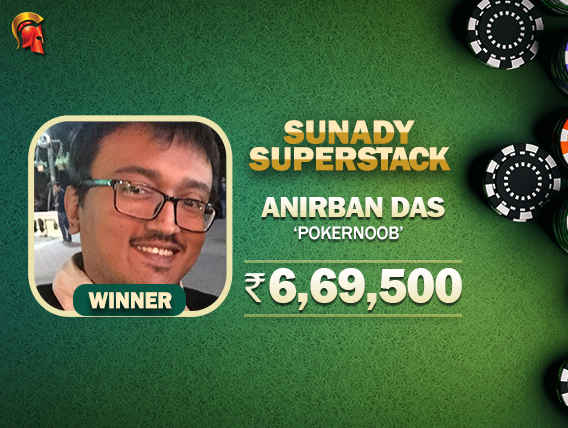 Sunday is the day every online poker player awaits as most of the online poker rooms hold their most awaited tournaments on this week off day. On The Spartan Poker, a couple of tournaments are played out each Sunday including the Sunday SuperStack INR 25 lakh GTD – an INR 5,500 re-entry tournament. Last week saw Arjun Arora winning this high ROI tournament.

Yesterday, on Sunday, the Sunday Superstack was played and it as usual saw a massive 515 entries which boosted the 25L GTD to INR 25.75 Lakh GTD. A total of 50 places were paid a minimum sum of INR 12,875.

After a gruesome battler for the top spot, Anirban Das aka ‘pokernoob’ came out on top of this vicious field after a total of 7 hours and 45 minutes which won him the top prize of INR 6,69,500 for finishing first. ‘Alibaba_kings’ finished in 2nd place, taking home a big chunk of the guarantee, summing up to a total INR 4,12,000. The tournament started at 7:30 pm on Sunday and went on till late 3.15 am on Monday morning.

In the final hand of the tournament, with a relative chip lead, pokernoob opened the betting by raising it preflop to 240,000 with Ks Kd and Alibaba_kings with As 8h re-raised to 840,000 only to see pokernoob bumping it to 2,000,000. After flat calling the 1,320,000, Alibaba_kings shoved all in with the flop reading 3c 6c 8d and saw an instant call by Das with his Ks Kd. The board paired up on the turn with a 3d and the river was a Kc giving pokernoob a fullhouse, Kings full of Threes and giving Alibaba_kings two pairs, Eights and Threes.

Anirban Das won the tournament, ironically beating Alibaba_kings with Kings. Another top name in the online circuit to finish in the money in this week’s Sunday Superstack was Mani Singh aka ‘KOQ’ who finished 4th taking home a sum of INR 1,69,950. Gutshot caught up with Das after this victory. He said, “Was great to win this one since it’s Spartan’s oldest feature tournament. Had come 2nd a few weeks back so was nice to finally close this one out. Was smooth sailing since before the bubble right upto FT. There were a few hiccups in heads up, but got it done relatively easily. Big shoutout to fellow old timers spectre and KOQ who were also on the FT”