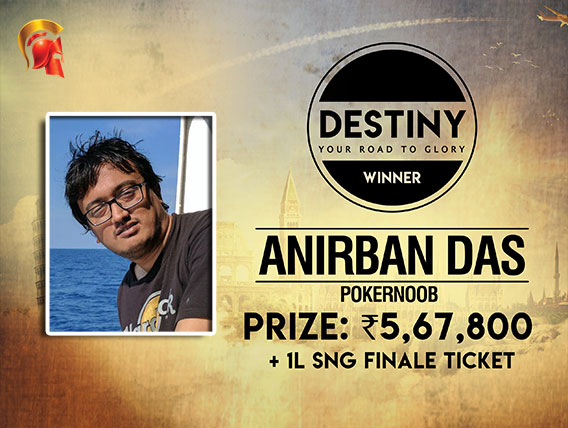 The sixth edition of the Destiny tournament series kicked off a couple of weeks back on The Spartan Poker. In this popular series, a winner is crowned every Wednesday night and after 10 weeks, 10 winners sit down in a ‘winner-takes-all’ SnG Finale, for the mega prize of an INR 10 lakh package trip to Europe.

With the ever-increasing success of this tournament, Spartan recently decided to bump up the guarantee of Destiny 6.0, with INR 25 lakhg GTD up for grabs every Wednesday. Last night too, the tournament kicked off at 7:30pm and a massive field of 504 entries registered to this INR 5,500 buy-in tournament.

At the end of the night, it was Anirban Das aka ‘pokernoob’ who was victorious, beating this field and moving one step closer to writing his own Destiny and winning the package trip to play poker in Europe. Das has had a love affair with this series, having not won it just once or twice. This will in fact be the third time that Das will make his way to the Destiny SnG Finale, and maybe this time, he’s ready to win the INR 10 lakh package as well.

Das last won the Destiny in February, in the fourth edition of the series, but he’s been a regular on final tables on Spartan, while also topping the SSS Leaderboard last month. Last night, the guarantee was slightly passed, and the top 40 players shared the prize pool, with a minimum cash prize of INR 15,120. Das took away the biggest share of this prize pool, winning INR 5,67,800 + an INR 1 Lakh Destiny SnG Finale Ticket.

We caught up with the winner to see how he feels after this victory. He said, “Longest heads up of more than 2 hours! Started at 1:4 disadvantage and was good to patiently grind it out given the amazing structure. Was nice to ship a big one after missing out on 2ok last couple of times. Was really tough final 5 and well played to sickb3at. Shout out to jogiii , narammasala, juntadel for cheering me on FT.”

Keep reading GutshotMagazine.com for more updates on the biggest poker tournaments in India.