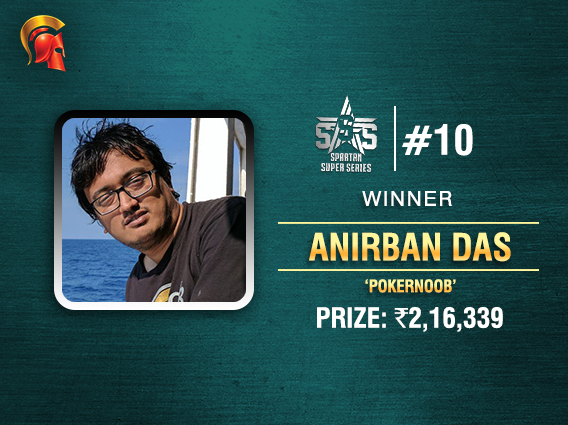 Anirban Das is now making a habit of taking down online poker titles every once in a while. He actually makes sure he gets one or two titles in every major series that is being hosted. Apart from winning a title here and there, he also makes sure he brings his A-game to such series, especially on The Spartan Poker.

Currently, we have completed two days of play at the Spartan Super Series (SSS) and Das who plays under the name ‘pokernoob’ on Spartan has won another title, after finishing on top of the SSS Leaderboard in August as well. Last night, he shipped SSS Event #10 INR 10 Lakh GTD.

It was an INR 2,200 re-entry tournament and it was also the final tournament of SSS Day 2. A massive field of 555 entries meant that the guarantee was broken and the prize pool was taken up to INR 11,00,000, which was eventually shared between the top 47 finishers with a minimum cash prize of INR 6,327.

‘pokernoob’ is well known by anyone who plays on Spartan and this guy did it once again last night, shipping Event #10 and taking away the top prize of INR 2,16,339 – yet another 6-figure online score for this player. He beat ‘guru’ in heads-up, who had to settle for INR 1,37,418 for finishing second.

Keep reading GutshotMagazine.com for updates on each of the 37 tournaments scheduled in the SSS series on Spartan.