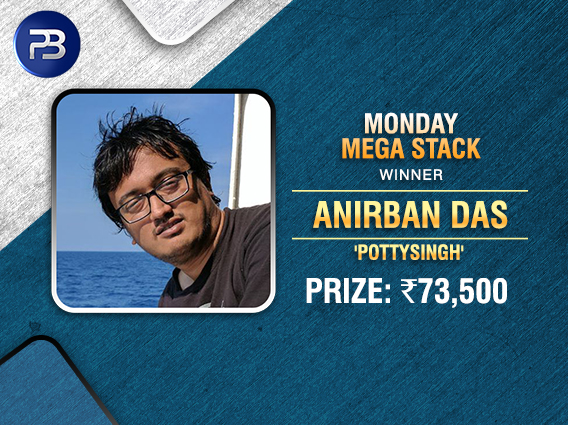 PokerBaazi hosts several online poker tournaments each day of the week and yesterday was no different. They had The Big Monday where Neeraj Kumar aka ‘SelfClaimedPro’ beat a tough field to claim the top prize of INR 1.22 lakh. However, this wasn’t the only tournament they hosted on the day.

They also had the INR 3 lakh GTD Monday MegaStack tournament which kicked off after the featured tournament of the day. The tournament started at 9pm and by the end of the registration period, we had a total of 135 entries (76 players + 59 re-entries) joining the tournament.

The tournament had a buy-in of INR 2,200 and the prize pool was eventually shared by the top 13 players with a minimum cash prize of INR 7,500. Anirban Das aka ‘pottysingh’ came out on top of this field and won the biggest prize of INR 73,500, making a small addition to his poker bankroll.

Das is used to big online poker wins, especially on Spartan, where he plays under the name ‘pokernoob’. His recent poker accomplishments there include two Destiny titles and topping the SSS Leaderboard as well. In this latest tournament on PokerBaazi, Das beat popular player Akshay Nasa aka ‘sherlock52’ in heads-up.

Nasa also had a pretty impressive night, as he usually does on PokerBaazi. He finished second to Dhawal Lachhwani in the WSOP Europe Mega Satty, and then also finished third in The Roar on Adda52, which was shipped by ‘Vickyarikeri’. Overall, he must’ve walked away with a decent sum of money last night.

Gutshot caught up with Anirban Das after he completed another victory online. He didn’t have much to say as it was just another day in the office for him, but he was happy to beat this opponent in heads-up, saying, “It was nice to finally beat ‘sherlock52’ (Nasa) in heads-up and that too on PokerBaazi.” Keep reading GutshotMagazine.com for more updates on Indian poker tournaments.