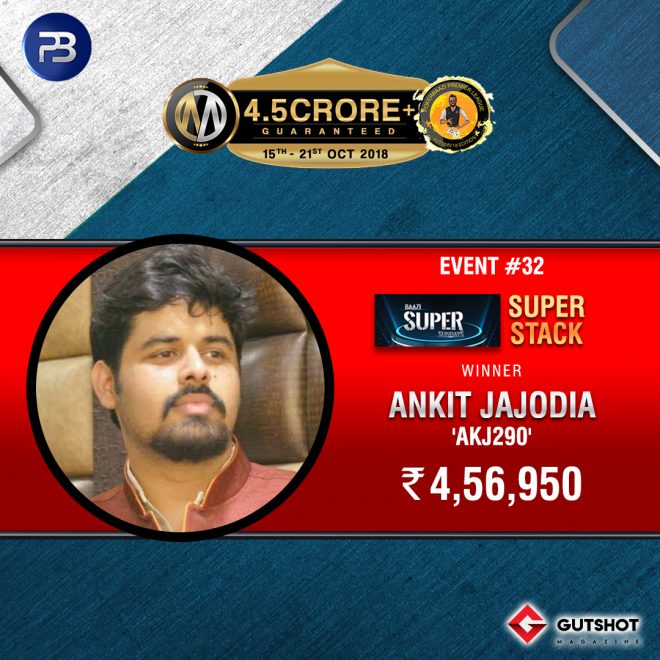 The PokerBaazi Premier League (PPL) Autumn Edition turned one to be one of PokerBaazi’s most successful tournament series ever, with almost every tournament passing its advertised guarantee and players falling in love with PokerBaazi’s new design and user interface.

Most of the top players would’ve been playing this along with the MoneyMaker and the INR 5,500 tournament saw a total field of 481 entries registering (including 211 re-entries), which took the prize pool up to INR 24,05,000. This prize pool was distributed among the top 44 players with a minimum cash prize of INR 12,025.

Outlasting this field and taking home the top prize of INR 4,56,950 was none other than Ankit Jajodia, who has been making deep runs very frequently on PokerBaazi of late, playing under the screen name ‘akj290’. Apart from this win, he had another title in the series and finished on #4 on the PPL Leaderboard, with a total of 10 cashes in the series.

In this tournament, Jajodia went past quite a few big pros, including beating ‘OMG_spew’ in heads-up, who won INR 3,36,700 for finishing second. The third-place finisher was Chiraag Patel aka ‘Versutus’ who won an amount of INR 2,52,525. This turned out to be Jajodia’s biggest online poker score.

Gutshot caught up with Jajodia after this big victory. He told us about the tournament experience, saying, “It was a great series for me personally. I had a couple of wins and after getting eliminated near the bubble in the PLO HR and HR and 7 positions away from the MoneyMaker bubble, I ended the series with my biggest score yet. Overall, I’ve been working hard on my game. I used to do well in the Grinders series, so it feels good to do well at higher stakes too.”

Keep reading GutshotMagazine.com for more updates from the PokerBaazi Premier League and other poker stories from around the globe.