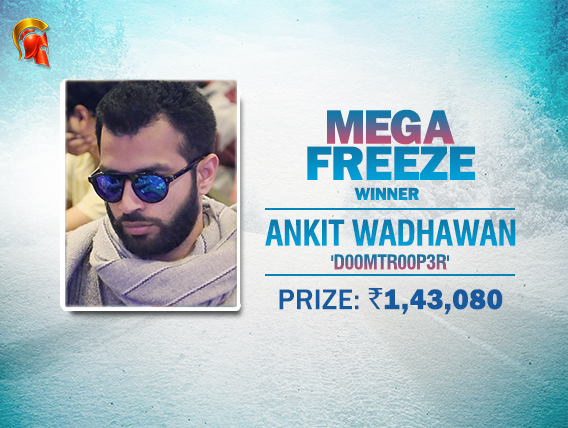 The India Online Poker Championship (IOPC) may have ended on The Spartan Poker, but there are still a lot of high-guarantee tournaments taking place online. One of their daily featured tournaments is the Mega Freeze tournament which takes place every Monday at 7:30pm IST.

The freezeout tournament took place last night with a buy-in of INR 5,500 and an INR 5 lakh GTD prize pool. A good participation of 112 entries was witnessed, which beat the guarantee and generated a new prize pool of INR 5.6 lakh. The top 15 finishers in this tournament were awarded a minimum cash prize of INR 10,080.

Wadhawan faced off against ‘Arjun1’ in heads-up and since the latter had a considerable smaller chip stack, he shoved all-in pre-flop with 4d Qs, and Wadhawan spent no time thinking, calling it with his strong hand of Kc Qh. The flop opened 7d 2c 4h and initially, Arjun1 took the lead but that changed with the Kh on the turn and the 3s on the river. Wadhawan took down the pot and the title, with his pair of Kings beating Arjun1’s pair of Fours.

While most suffer from Monday blues, Wadhawan would’ve been a happy camper last night as he shipped the tournament and was awarded INR 1,43,080 for first place. His heads-up opponent wouldn’t have been too disappointed either, winning a decent prize of INR 98,560 for second place. Wadhawan also finished runners-up in Event #48 of the recent IOPC series.

Tonight, is the Mega Stack tournament on Spartan and you can get daily updates of such high-value Indian poker tournaments on GutshotMagazine.com.