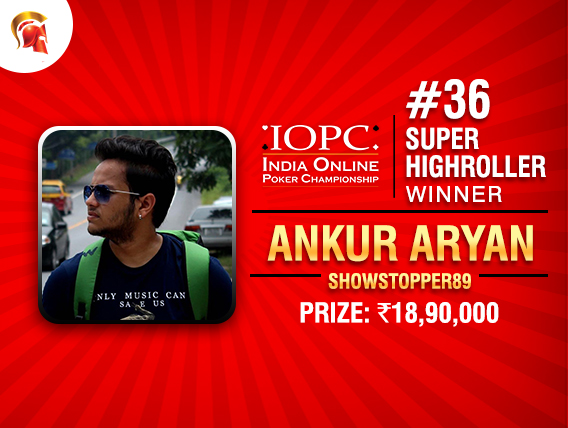 Poker players from across India had their eyes on the IOPC Super High Roller tournament since the last couple of weeks. Yesterday, the wait was over as the tournament kicked off at 9pm IST with a steep buy-in of INR 55,000 and a massive guaranteed prize pool of INR 50 lakh.

The tournament was part of the ongoing India Online Poker Championship (IOPC) on The Spartan Poker and the guarantee was smashed yet again. IOPC Event #36 Super HighRoller INR 50 Lac GTD (55000 RE) saw a total participation of 135 entries, generating a new prize pool of INR 67.5 lakh.

Only the top 15 players were paid out in this tournament, with all guaranteed a minimum 6-figure score of INR 1,28,250. Coming out on top of this field that consisted of some of the best poker players in the country was Ankur Aryan aka ‘showstopper89’, who walked away a whopping prize of INR 18.9 lakh for first place.

Aryan beat ‘alienrobot’ in heads-up, who also won the Daredevil tournament on Spartan just a couple of weeks ago. He may have lost the heads-up battle and the IOPC title, but he was still rewarded very handsomely for his deep run, taking home INR 12,31,875 for second place. Loveleen Singh aka ‘sridevi123’ also finished 5th in this tournament for INR 4.21 lakh, after shipping an event earlier in the day.

It was a looonnnnnnng grind for these two players, as the tournament lasted nearly 11 hours, ending at 7:51am IST today morning. This was the second biggest win in this series of the IOPC so far, after Nikhil Ramesh won The Millionaire a week back. Aryan also entered the top ten of the IOPC Leaderboard and will want to keep grinding in the last 3 days of the series.

Gutshot had a word with Aryan after this big win. He said, “I wasn’t very sure of playing the SHR but finally decided to give it a try. So, I registered very late ~3 hours post the start of the game. I got an early double up and from there, I never looked back. I started as chip lead in FT but got few bad beats and folded some good hands. I didn’t want to marginally call pot-sized bets of a particular bluffer though I was reasonably sure I was good. I waited patiently for good spots and that paid off. 3-handed play was funny with one guy playing over aggressively almost every hand. There was a time I had only 10 BBs in 3 handed table and other 2 players had around 50 BB each. But, finally I managed to ship it! It certainly feels good to ship any event and if it’s SHR, it’s even better. Two SSS series back, I shipped the leaderboard. Running 10th in the leaderboard as of today. Will try to improve my position in this leaderboard as well.”

Check out the IOPC Leaderboard after Day 7: 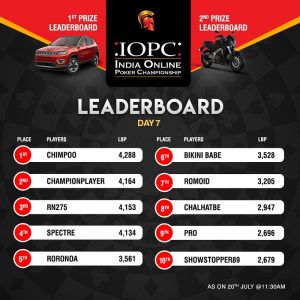