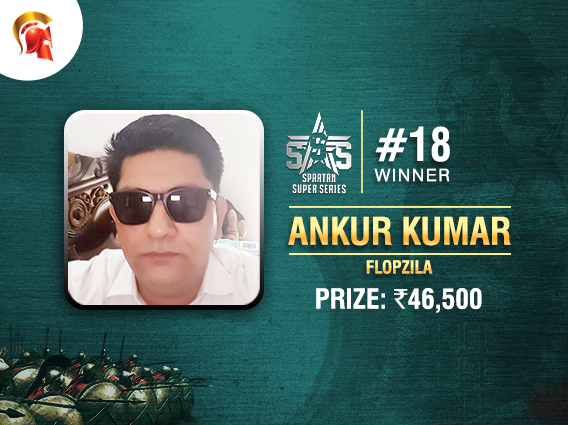 Day 4 of the ongoing Spartan Super Series was played yesterday and after a couple of exciting tournaments to begin with, the action turned to the third tournament of the day – SSS Event #18 INR 2 lakh GTD, a Freezeout tournament with a buy-in of INR 1,100 and a prize pool of INR 2 lakh.

No one would want to miss an opportunity to grab a big prize with such a small investment and that’s why a field of 178 entries registered to the tournament, with the top 23 players being paid out a minimum cash prize of INR 2,320. After a long grind, Ankur Kumar aka ‘FLOPZILA’ shipped the tournament.

Coming to the final hand, Kumar had a 2:1 chip lead over his opponent and was eager to put an end to the tournament as soon as he could. Being dealt Ah 6d, Kumar decided to shove the rest of his chips into the pot pre-flop, and bapu1982 made the call with his hand of 8d Kd.

The community cards opened 4c 7c Td Jc Jh and the board hit a pair of Jacks, with neither player improving on their hands. Both players had a J-pair, but Kumar won the pot with a higher kicker, A, which gave him the title and the top prize, while also gaining important points to the SSS Leaderboard.

Gutshot caught up with the winner after the tournament. The 43-year old businessman from New Delhi completed his MBA from Amity Business School, Noida. He told us about his introduction to poker, saying, “My poker journey started with Zynga in 2007/2008. I used to play Teen Patti before that but once I started playing on Zynga, it became my passion. On Diwali, we started playing poker cash games. Then, live games in Delhi and then online in 2016 on Spartan and 2018, started playing MTTS.”

After this tournament, all the attention turned to The Flash INR 12.5 lakh GTD and the INR 40 lakh GTD Super High Roller. Keep reading GutshotMagazine.com for more updates on those tournaments as well as other updates from the ongoing SSS series.