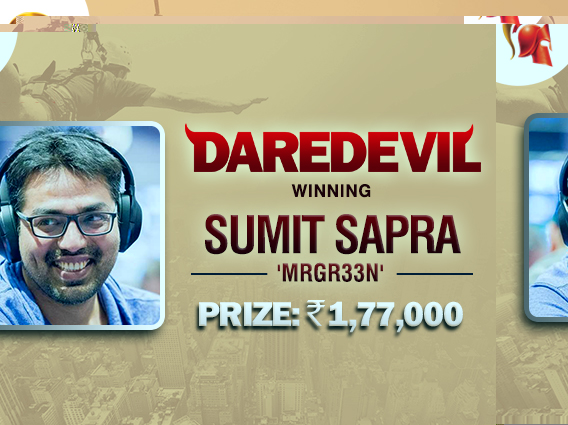 What can we say about Sumit Sapra? If it’s not PokerBaazi, it’s The Spartan Poker. If not Spartan, it’s Adda52. If it’s none of these, he’s busy staking up in live poker tournaments around the world. One of India’s best pros at the moment, the player has a habit of regularly picking up important titles.

Yesterday was one such successful night for him, bagging another big title on Spartan, where he plays under the name ‘mrgr33n’. He entered into Daredevil INR 6 Lakh GTD on Spartan last night, which is their featured tournament for Saturday, giving players the chance to end their weekends on a high.

Players bought in last night with the regular buy-in price of INR 4,400 and this is the only tournament where re-buys cost 50% of the original buy-in. All in all, 216 entries were a part of the competition yesterday, and the prize pool was eventually distributed among the top 9 players, each receiving a min-cash of INR 19,500, which is nearly 5x the original buy-in.

Coming out on top of a strong field is not much of a task for Sapra and he proved that again last night, beating everyone else to add another online title to his list of achievements.

The tournament began last night at 7:30pm and it was less than 5 hours later that Sapra was declared winner and walked away with the top prize of INR 1,77,000 – another welcome bankroll boost for the pro. It was at 12:15am this morning that it ended, with Sapra beating another top player in heads-up.

It was Sahil Mahboobani aka ‘ImHighIshove’ who finished in the runner-up position, winning INR 1,12,500. Now Mahboobani has also been on a brilliant run in poker, having won quite a few online tournaments after he finished runner-up in the WPT India Main Event last month in Goa.

For more updates on Spartan featured tournaments and other top stories from around the world, keep following GutshotMagazine.com.