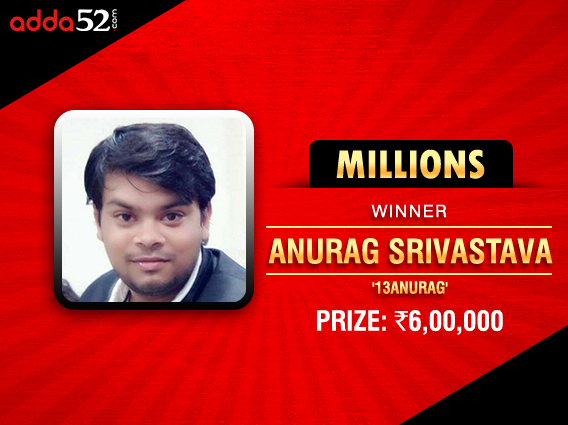 Most of the top Indian poker companies host a couple of their signature tournaments every once in a while, and for Adda52, it is the Adda52 Millions that takes place each Sunday. With a steep buy-in of INR 11,000, the tournament sees modest fields in terms of numbers, but these fields include India’s top pros.

You’ve to be a really good poker player to emerge victorious in the Adda52 Millions and yesterday, it was Anurag Srivastava who beat the field to take away top honours. He beat a total of 174 entries (122 players + 52 re-entries) to win the tournament and take away the biggest prize of INR 6 lakh.

As usual, there were several high-profile names finishing in the money, with 12 players from the original field taking away a minimum prize of INR 35,000 each. The 8pm start last night went on until 4:39am this morning before Srivastava was crowned champion, beating another top pro in heads-up.

After this long grind of nearly 9 hours, Srivastava, who plays under the name ’13anurag’, beat Akshay Nasa aka ‘vibaks’ in heads-up. If you remember well, Nasa won the Adda52 Millions just a couple of weeks back and he was ever so close to doing so again, holding the lead at some point in heads-up as well.

Nasa took away INR 3,80,000 for finishing second, while he also did well on other platforms on the night. He shipped the BSS PLO tournament on PokerBaazi, adding INR 1.42 lakh to his poker bankroll there as well. Finishing in third in the Millions was Danish Shaikh aka ‘King0fMerge’ who took away INR 2.65 lakh while also winning a whopping INR 10 lakh in yesterday’s One Time tournament on Adda52.

Gutshot caught up with Anurag Srivastava after this major achievement. He said, “Adda52 Millions has a great structure. This was a tough final table and it feels great to win one of the major weekly tournaments in the Indian only poker space.” Keep reading GutshotMagazine.com for more updates on India’s top poker offerings.