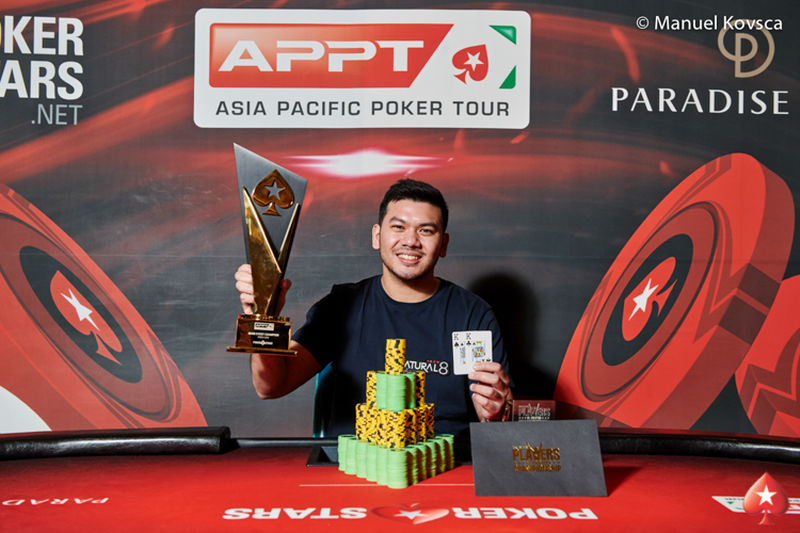 Twenty-eight-year-old Malaysian pro-Michael Soyza bests tough final table to win KRW158.7M (US$ 1,47,000) plus a PSPC Platinum Pass worth US$30,000. The Malaysian poker pro battled back from a 2-1 chip deficit to defeat Japan’s Mitsuhiro Shiga after a back-and-forth heads-up battle.

The lead changed hands multiple times before the final hand played out close to 90-minutes into the confrontation. Soyza had edged in front and raised from the big blind after Shiga limped the button.

After leading the T♠T♥5♣ flop, Soyza holding K♠K♣ set a trap by craftily checking the 9♣ turn. Shiga took the bait, moving all-in for the last of his chips with J♠8♣ for a turned straight draw, eliciting a quick call from his opponent.

Soyza, who won his second PokerStars LIVE title just two days prior in the NLH-PLO, also final tabled the 200K NLH and cashed the APPT Kickoff, bringing his winnings for the festival up to KRW171.16M (~US$160,000).

While he came into the final day of the 449-strong Main Event field – the largest in Korean poker history – with the lead, Soyza had to overcome a tough field. It was one featuring reigning champion Taehoon Han, Team PokerStars Online Pro Randy ‘nanonoko’ Lew, seasoned pro Bryan Huang and a man who had already won two APPT titles in the space of a single day – Yuki Ko.

“I tried to play solid, not make any mistakes,” Soyza said. “I got a pretty good table draw in the beginning, but it got worse on the final table with Bryan on my left and Eric [Wasylenko] as well. They’re both good players so it would’ve helped to have them on my right.”

“But you know, just run good, catch some cards, make some full houses and, BOOM, shipped!” said Soyza right after his win.