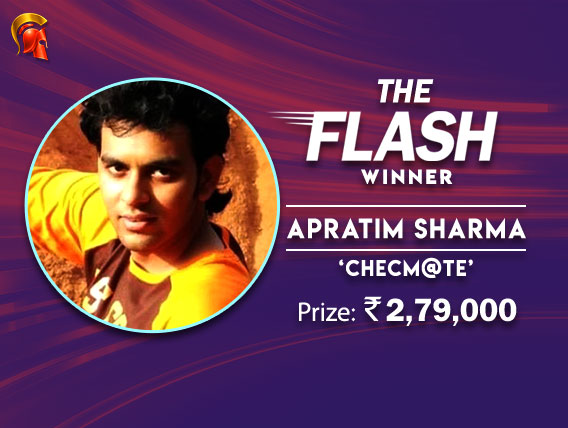 Apratim Sharma emerged victorious in The Flash tournament at The Spartan Poker last night for INR 2,79,000. Sharma who plays under the moniker ‘checm@te’ outlasted 252 entries in the tournament to take the first place prize.

Based in Bengaluru, Sharma has previously bagged an India Online Poker Championship (IOPC) title in the month of July this year. Sharma had won IOPC #9 DareDevil outlasting 159 entries for INR 3,67,931 and now adds this win in the Flash to his title kitty. He is also making a good run in Spartan’s BigWin2 promotion as well with more than 300 VIP points currently he is in a position to claim Level 2 prizes. For more information on that promo, click here.

Coming back to the Flash, this 12 Lakhs GTD tournament with a buy-in of 4,400 gave payouts to the top 23 places with a min-cash of 13,920. Sharma defeated Shravan Chhabria a.k.a ‘D.Trump04’ in the heads-up battle and Chhabria collected 189000 for the second-place finish.

This is one of the biggest wins for Sharma after his IOPC title which is a good sign on his game’s improvement. He told Gutshot that he is looking to jump live games in the near future.