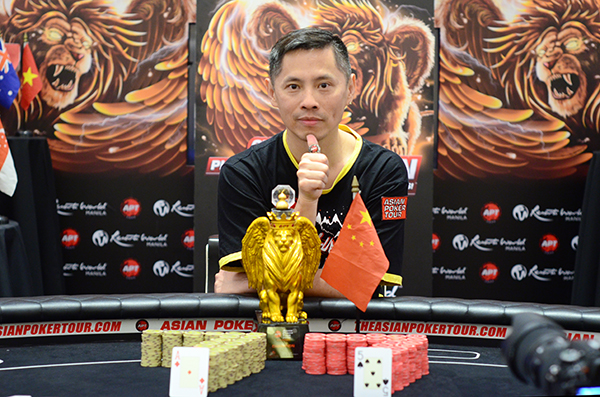 APT Philippines II 2019 festival came to a standstill after 12 intense days of grinding. The Resorts Manila’s new Grand Wing crowned another winner at the Championships Event which is now engraved in the history books.

The event that ran from September 18 to 22 registering 265 poker players from the Asia Swing. At a buy-in of PHP 82,500, a healthy prize pool of PHP 19,278,700 was drawn. The payout on Day 3 reached starting 27th place and the largest portion of the prize money was distributed on the final day among the top 8 remaining players.

The festival’s second-biggest event saw the emergence of China’s Xixiang Luo shipping an ambitious amount of PHP 4.5 million. Luo won his first-ever title in APT Philippines after entering the competition on the final day with the largest stack. The final 8 players entered the showdown to experience 8 long hours run.

Singapore’s Alex Xiang Wei Lee fell in 8th place to Korean Jehun Hong’s Js Jh. Eventually, other players like Jeonggyu Cho also slipped to 7th position after Luo’s Ac Qh. At this time, the tournament focused on a small number of 6 remaining players. The board completed with 8s 3c As 8h Qc and Hong had Ac Qs, the top two pairs against Jung’s 8d 8c.

As the event continued, among the final 3 players were Graeme Siow and Philippines’ Benigno Ledina. Eventually, Ledina’s day concluded in 3rd position at the hands of Luo’s Kc 9d (two pairs). Luo rose up with 5:1 chip advantage and the heads-up round lasted for 15 minutes. Siow went all in with Jd 4d on a flop 2c 7d 7s. The turn and river opened 2h 6c with no hits for either player. Luo shipped the prize money, the APT Championships Trophy and APT Championships ring.

Marking the end to APT Philippines 2019, APT Taiwan is not far behind, scheduled to run between October 9th-20th. So, keep reading GutshotMagazine.com and stay tuned!

ign-up to PokerSaint using code “GUT100”. Check out our online poker rooms section, where you can read reviews on the biggest and best poker rooms in the country, while also taking advantage of their bonuses and promotions. Check out these top poker rooms HERE.