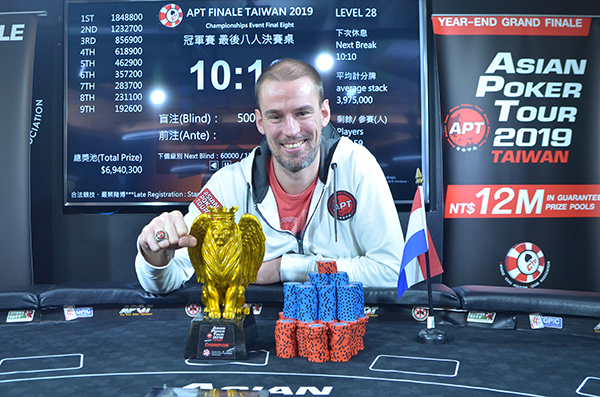 The third and final stop of the 2019 Asian Poker Tour (APT) Finale Taiwan halted yesterday after rejoicing a 12-day long run. The Main Event was followed by the second featured tournament that marked the end of the prestigious APT festival. Lifting the APT Championships Trophy was Dutch pro Tobias Peters, the newest winner crowned in the CPT Club.

The tournament lasted for 5 days, observing 159 players who took their seats for the TWD 49,500 buy-in. The displayed guarantee was smashed, generating a bigger prize pool of TWD 6.9 million, a portion of which was shared among the top 16 finishers. The final table resumed with 8 survivors led by Day 3 chip leader Neil Raine yesterday.

The competition was undoubtedly fierce, Dutch player Peters entered the day at 6th place. At first, it was Chi Ying Tsai to depart. Following Tsai’s heels was Raine who suffered three hits by Go Mori and Sera Ota to eventually rest at 7th place. The lead kept changing and the field further reducing. Before heads-up got underway Ota was pushed out with Peters’ 7c 7s against her 6d 6s and exited the table in the third place.

Heads-up lasted for 20 minutes. Peters entered the final hand carrying the larger stack of 4.9 million chips and Js Jh playing against Takao Shimizu holding 6d 8s with 3 million chips. The board ran Kc Jd 5c 5d 6h and that’s when Peters tossed his full house and railed out Shimizu in the runner-up position. The champion was awarded the APT Championships trophy, APT Championship Ring, and TWD 1.84 million in prize money further strengthening his total live earnings of over $2.25 million.

For latest updates on poker news and tournaments around the world, keep reading GutshotMagazine.com and stay tuned!