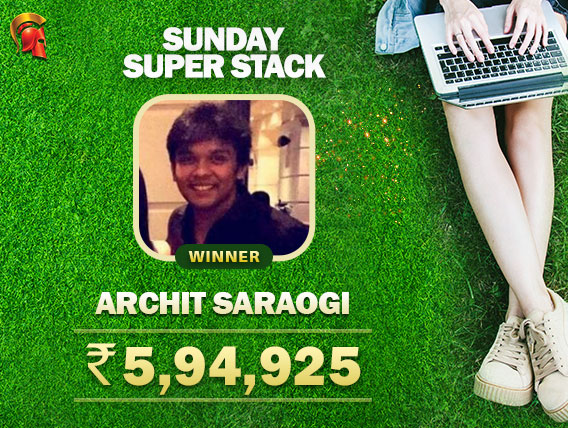 The prizepool went well beyond the promised guarantee eventually settling at INR 22.45 Lakhs as a result of the 320 entries which took part. A total of 40 places were paid out with min cash being INR 13,740. Eventually the field was trimmed down to two players, Aces21 and online reg Arsh ‘BigggTymeR’ Grover. Grover had made several deep finishes and came close to winning the Hot Tournament Leaderboard challenge last month but was pipped at the post by Bangalore’s Vinay B a.k.a Minimalist. Both players had almost exactly the same amount of chips when heads-up began, each holding approximately 5.2 million in chips and Aces21 holding a very slender lead. A big hand happened in Level #51 50,000-100,000-12,500, where BigggTymeR in trying to chase a club flush draw ended up giving about half his stack to Aces21. He lost another chunk of chips (1.2 million) when his Threes were rivered by Aces21’s Seven pair.

The final hand of the tournament took place a few hands later in the same blind level. Aces21 had over 9 million in chips versus his opponent BigggTymeR’s 2 million. Seeing an Ace in headsup is always a good thing and so when he got (Ac 4s) dealt, BigggTymeR wasted no time in getting his chips into the middle. Unfortunately for him, Aces21 took woke up with an Ace and a much bigger one at that (As Qc) and had no hesitation in calling. No help for the short stack on the board of Th 3s 6d 5s 9h and that was all she wrote for this tournament. Aces21 took down the title and first place prize of INR 5,94,925 while Arsh ‘BigggTymeR’ Grover would have to settle for a runner-up prize of INR 3,70,425.

Archit Saraogi was delighted with the win saying, “Winning a big tournament always feels good and special. Overall was a great experience especially with the deep structure where the game can change at any point of time. With the deep stack structure, it enhances your ability to be creative playing pots post flop. Spartan has been kind to me, the kinds of tournaments it brings along always gives a chance to make good money.”